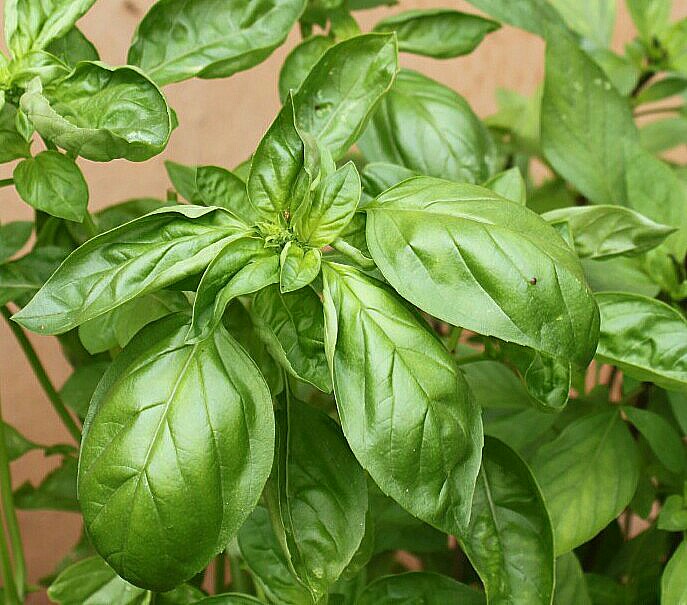 The King of Herbs (and the Queen of Ice Creams)

Question: What does fragrant Sweet Basil have in common with the Basilisk lizard?

Answer: The lizard’s mythological ancestor lends a derivation of its name to this, my favorite of all herbs. But then so does the Greek word for king, basileús. It’s believed that the exclusive use of the curative basil in Ancient Greece’s royal court, led to its name basilikón,  translated literally as “the royal herb.”

In Greek mythology the only magical cure for the fatal stare, breath, or bite of the creepy half-lizard, half-dragon basilisk, was a basil leaf. For the same reason, it was also heralded by the Romans. Another point on which they agreed was the importance of ranting and raving  while planting out the very strongest basil seedlings. I have no idea why. And then the French being the French, they turned this odd tradition into language: semer le basilic, or sowing basil, which means to rant or slander or just let rip.

The British, meanwhile, looked askance at this herb so loved by their continental bêtes noir.  In 1589 one T. Cogan Hauen of Health wrote about “A certaine Italian, by often smelling to Basill, hadde a Scorpion bredde in his braine.”

Add to this the poem written by Chris’s favorite poet, John Keats, ‘Isabella, or The Pot of Basil’ in 1820, about a young woman who hides the head of her murdered lover in a pot she later fills with basil plants, and then you understand why the French tend to semer le basilic about the English and their abuse of culinary herbs.

Well, thank God for Sarah Raven is all I can say. This (very) English award-winning cook and gardener led me to one of the tastiest ice creams ever invented, a recipe inspired by the Amsterdam restaurant, De Kas. The ancient Egyptians and ancient Greeks, who believed that basil would open the gates of heaven for a person passing on, would not have been at all surprised to learn that, when I first tasted this ice cream, I saw heaven.

1. Pick the leaves from the basil stems and blend with the sugar in a food processor, then combine with the other ingredients. (I used a whizzer stick to blend the basil and sugar, along with a cup of yogurt, and then added the remaining yogurt and mascarpone cheese to this mixture.)

2. Pour the mixture into an ice cream maker and churn for about 20 minutes. (I used the no-churn method, freezing the ice cream for a couple of hours and then breaking up the ice crystals with the whizzer stick, before refreezing it over night).

3. Either serve immediately if using an ice cream maker, or pack into plastic containers for the freezer (allow the ice cream to sit for 15 minutes in the fridge before serving).

Note: This has a wonderful flavor if it is eaten as fresh as possible. Don’t store it for too long in the freezer.