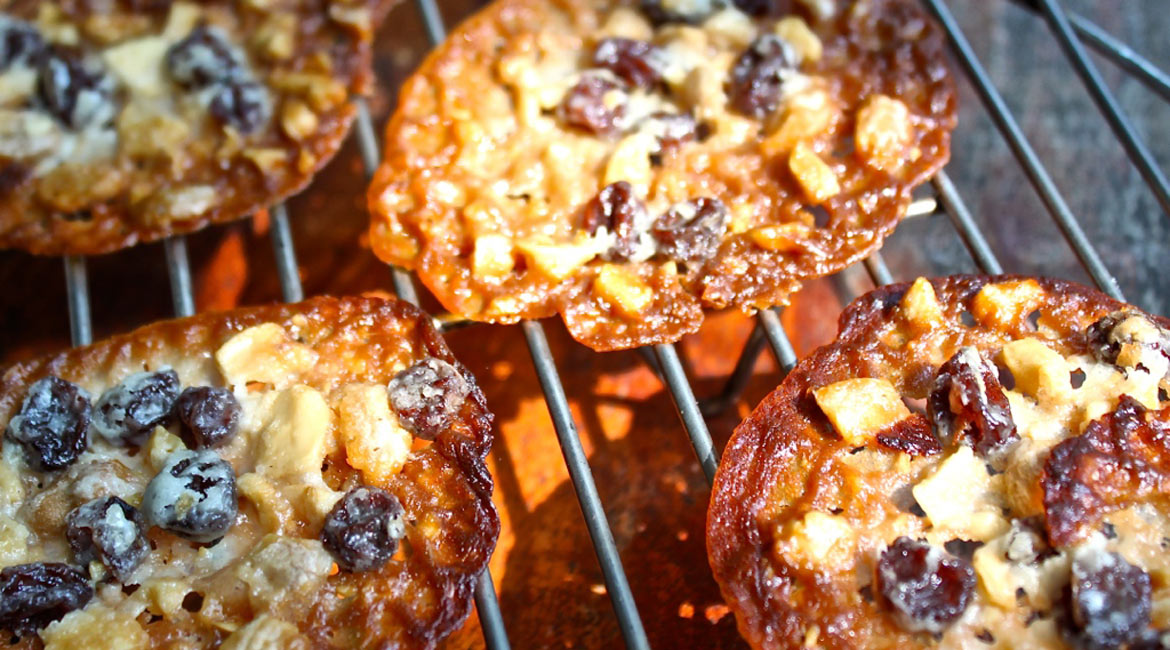 The first florentine I ever made was at my English cookery school back in the early 1980s. Flying out of an African civil war, where luxury foods were mostly nonexistent, into the cosseted university town of Oxford, I’d never eaten a biscuit so delicate. Or more-ish. With hindsight, I’ve no doubt florentines played a part in transforming my youthful hourglass figure into the half-hour on the top, three hours on the bottom, wonky egg timer with which I returned home a year later.

That was over 30 years ago, and I’ve hardly made them again since. At least not until I came here and thought about baking them using Mongongo nuts, harvested from the tree that umbrellas our house. Where the idea came from is a mystery. Where it ended up had an adverse effect on the egg timer …

The origin of the florentine is controversial. Wikipedia claims they are Italian, and one would assume they were invented in Tuscany with a name like florentine, but they are, in fact, French. According to a blog post in Honest Cooking called The Truth about Florentines, you just have to look at the main ingredient list to work this one out: butter, cream, sugar, chocolate. “Not only are the main ingredients typically French, but the fact that the base for Florentine biscuits is essentially a roux, an oh-so-French cooking technique, should also signal the true origins of this delicate tea-time cookie.”

When florentines work the way they are meant to, they’re a cinch. But herein lies the rub: they are notoriously hit and miss. There are many baking aficionados out there who insist you do this and you do that, but in my experience there are two stages that are critical to creating a wafer-thin crocheted trellis: make sure the base is a consistency that binds all the ingredients, and then keep a close eye on the florentines once they are in the oven.

What goes into a florentine is also up for debate, at least in countries where you have a broad choice of ingredients. Does one use dried fruit or not? What color chocolate is the tastiest? Which nut is best? Traditionally, almonds are used but any (flat-ish) nut works. Here, I have to make do. I use what grows outside, or what we’re storing in the deep freeze.

The classic florentine recipe demands that its bottom be coated with dark chocolate. Mostly, I make “nude” florentines because we like to horde our supply of dark chocolate as and when we receive bars from afar. Nude florentines add a much-needed crunch to a creamy fruit dessert, like a mousse or a fool, and are an impressive treat to serve to guests visiting for afternoon tea.