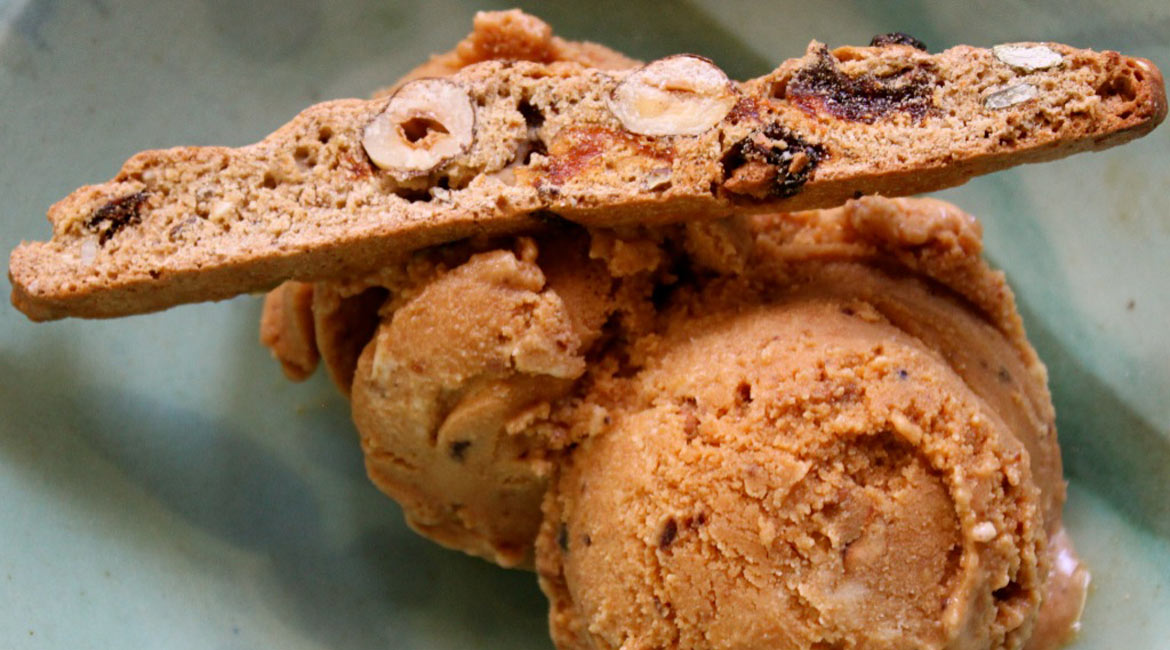 Ice cream-making began in our young lives when what-looked-like a random assortment of bits of wood and metal arrived — along with a music box, a large telescope, and an eclectic array of books and photos — on our farm in Karoi in what was then northwest Rhodesia. The consignment came from my German grandmother’s house in England and opened a window into a romantic world of lakes and snow-capped mountains far removed from our own rural world.

Like a jigsaw puzzle, I remember my mother assembling the wooden staves to form a bucket that had to be immersed in water to swell and tighten up inside the rusty metal rings that eventually held its shape. This was only the first step in what was a labor of love that made the end result all the more sweet and delicious. The ice and rock salt had to be acquired, the custard made the day before so it could cool and mature, and only then could the ice cream-making begin.

The custard was poured into a tin churn that sat on a metal seat in the bottom of the bucket.  A heavy cast iron, geared crank, emblazoned with the name “WHITE MOUNTAIN,” was then fitted to the bucket and churn. Ice, chipped with a hammer, was packed around the canister. We sprinkled rock salt in careful proportions layer by layer as we packed the ice. The rock salt lowers the freezing point of ice and serves to freeze the custard more rapidly. Once, it also helped to spoil a whole ice cream moment when the canister sprang a leak and the glorious, long-awaited ice cream was no more than a salt sorbet. Luckily, our local engineering shop soldered it back together and many more churnings followed.

This beloved machine eventually went up in smoke when ZIPRA, one of the armed wings of Zimbabwe’s resistance movement, burnt down our farmhouse in 1979, the final year of the civil war. Since that sad day I have owned two more salt/ice churns, both driven by electric motors that eventually burnt themselves up. Now, after our recent trip to Australia, we own a self-driven, self-cooled, bells-and-whistles model. As delicious as the ice creams produced by this machine turn out, none can quite compare with those made by an hour of hand-cranked anticipation, sat out on the kitchen steps where the salty iced water could flow freely through the overflow hole and into the dust.

We went through many variations and flavors, but our family’s firm favorite has to be a hazelnut praline. Today, while I make the custard, using a recipe from Constance Spry, copied below for ease of reference, my elder brother Simon makes the hazelnut praline.