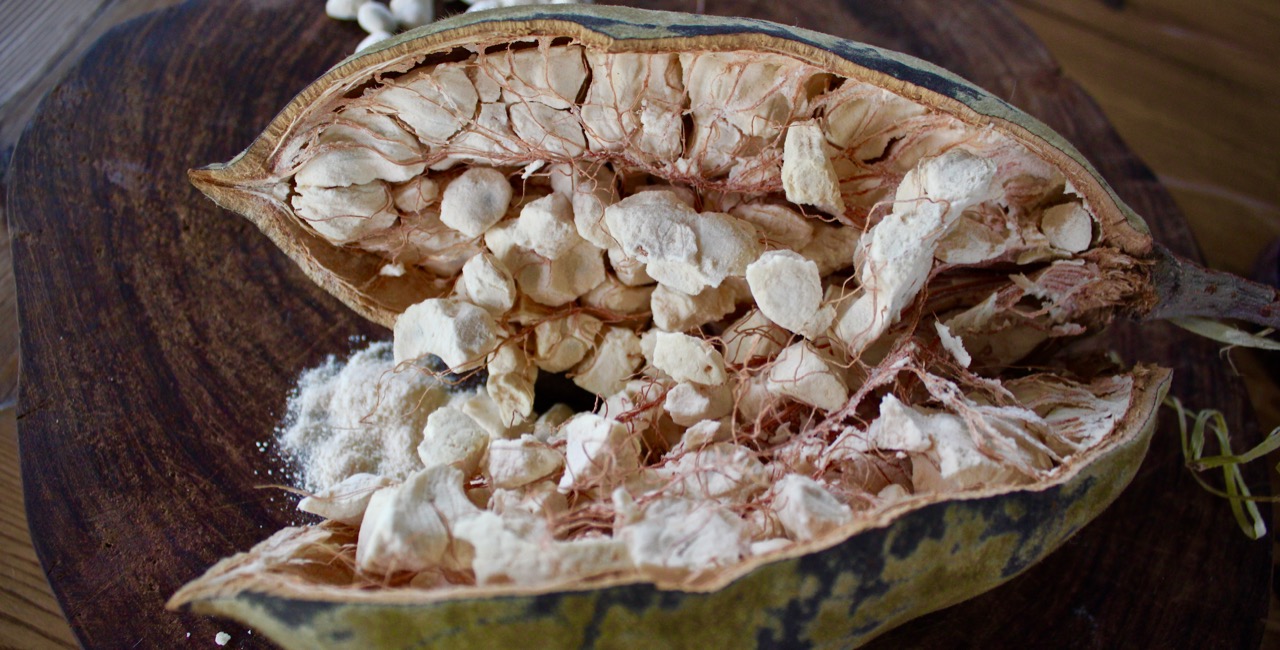 A number of my followers have asked me to share my recipe for Baobab Dukkah. As I recently wrote a commissioned piece on baobab trees for Royal Chundu Lodge, I thought I would combine the two.

In the Kalahari desert I used to work near Chapman’s Baobab, which was said, back then, to be the third largest tree in Africa. Its time-worn canopy not only provided cover for nomad tribes and 19th century explorers, its twenty-five-metre-round trunk was used as a post office and depot for traders and travellers moving in and out of the interior. Chapman’s Baobab was a significant tourist attraction until three years ago when it collapsed and died.

Baobab trees are under threat. I read in National Geographic that a “startlingly high percentage of the oldest, largest baobabs in Africa have died within the last twelve years,” and that though the culprit behind their deaths was still unknown, the scientists studying the causes suspected that the changing climate—our increasingly drier, hotter temperatures—was to blame. They claimed that, statistically, “it was practically impossible such a high number of large old baobabs could die in such a short time frame due to natural causes.”

The baobab tree is sacrosanct to the people of southern Africa. It is treasured for its longevity and its ability to survive long periods without water. The tree is also prized for its usefulness: its hollowed trunk is used for shelter or burial; its fibrous bark used for cords, cloth and fishnets; its leaves eaten as a vegetable relish; its seeds a source for vegetable oil.

But its fruit! Contained in a velvet-skinned pod the size of a lady’s clutch bag, powder-dusted seeds are held together like pieces of a puzzle in a netting of coral pink fibre. Its fragrant powder has the texture of sherbet and is tart, like a lemon. It has six times the number of antioxidants found in blueberries, six times the amount of Vitamin C in an orange, and six times the amount of potassium in a banana. Its status as a “super fruit” has grown in recent years, especially in Europe after it was approved as a food ingredient in 2008, and then in the United States the following year.

I am wary of the global hoorah surrounding the commercialisation of baobab powder. Here, we support sustainable harvesting of the fruit because it is a finite resource. We use it in some of our dishes at the lodge, but more importantly, the positive impact it has on the health of marginalised rural communities, where fresh food is often unaffordable or scarce, is critical. The trees also sustain myriad critters—elephants, baboons, monkeys, birds, bees, and much more—that live in, or off, its largesse.

Traditionally, at least here in Livingstone, baobab fruit powder hasn’t really been used in anything other than drinks or porridge. For me, its puckering acidity adds real depth to baked goods and condiments. It’s a terrific flavour enhancer. I use it as a substitute for sour dried ingredients unavailable in Zambia, like sumac, and have paired it with fragrant flower waters to elevate their delicacy, as in these Baobab & Rosewater Elephant Cookies illustrated below.

Royal Chundu’s Island Lodge is cloistered among a forest of old baobab trees. They reveal the age of this island, and for now, appear healthy and robust. The trees exist, it seems, in their own fertile microclimate created by the proximity to the Zambezi River. These baobabs, so vital to life on the island, are venerated by the staff and surrounding communities. It is Royal Chundu’s priority, therefore, to ensure that these mystical, time-honoured trees are conserved and protected.

Notes: By placing the nuts, seeds and spices over heat you are releasing the flavour, not cooking them. Please remember it is very easy to burn them when dry-roasting, so watch carefully. If it happens, turn down the heat, clean the pan and start again.