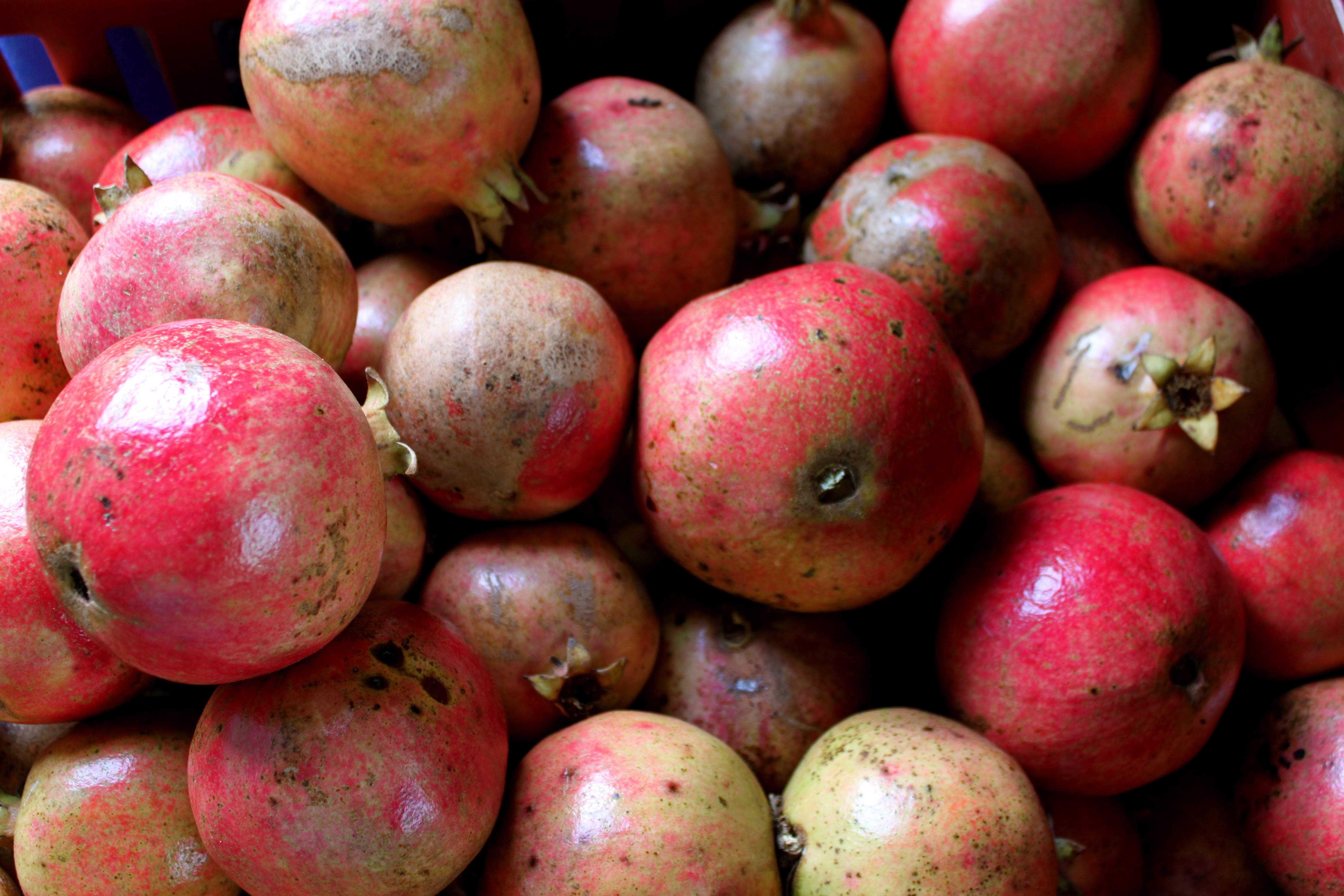 Being lucky enough to watch a pomegranate turn from flower to fruit helped me understand why it’s been regarded as a sacred symbol of fertility and rebirth by traditional cultures for millennia. From its Flamenco flowers dancing in the sunlight to its fecund fruit bursting with seed and blood-colored juice, it is a truly wondrous thing. We only have four trees, but from those we froze 45 pounds of arils this season. And that’s not including all the fresh seeds we ate or juiced every day. From time to time I will be posting favorite recipes in which I have used pomegranates.

In Ancient Egypt the pomegranate was also regarded as a symbol of prosperity and ambition (and used medicinally for the treatment of tapeworms, of all things). But it’s the myth from Ancient Greece about Persephone, the goddess of the Underworld, that I think best represents this exotic fruit.

… “Persephone was the daughter of Zeus and Demeter, Goddess of the Harvest. Persephone was such a beautiful young woman that everyone loved her … even Hades wanted her only for himself. One day, when she was collecting flowers on the plain of Enna, the earth suddenly opened and Hades rose up from the Underworld and abducted her. None but Zeus, and the all-seeing sun, Helios, had seen it. Broken-hearted, Persephone’s mother Demeter wandered the earth, looking for her daughter until Helios revealed what had happened. Demeter was so upset she withdrew into herself in loneliness, and the earth ceased to be fertile. Knowing this could not continue forever, Zeus sent Hermes down to Hades to demand he release Persephone. Hades grudgingly agreed, but before she returned he force-fed Persephone six seeds from the pomegranate–the Fates had earlier declared that if you ate in the Underworld you stayed there forever–binding her to him for half the year. For the other half she returned to her mother, Demeter. When Persephone was with Hades, Demeter refused to let anything grow and winter began.”

I end this post with a philosophical piece about the pomegranate from Kahlil Gibran’s book, The Madman:

Once when I was living in the heart of a pomegranate, I heard a seed saying, “Someday I shall become a tree, and the wind will sing in my branches, and the sun will dance on my leaves, and I shall be strong and beautiful through all the seasons.”

Then another seed spoke and said, “When I was as young as you, I too held such views; but now that I can weigh and measure things, I see that my hopes were vain.”

And a third seed spoke also, “I see in us nothing that promises so great a future.”

And a fourth said, “But what a mockery our life would be, without a greater future!”

Said a fifth, “Why dispute what we shall be, when we know not even what we are.”

But a sixth replied, “Whatever we are, that we shall continue to be.”

And a seventh said, “I have such a clear idea how everything will be, but I cannot put it into words.”

Then an eighth spoke—and a ninth—and a tenth—and then many—until all were speaking, and I could distinguish nothing for the many voices.

And so I moved that very day into the heart of a quince, where the seeds are few and almost silent.