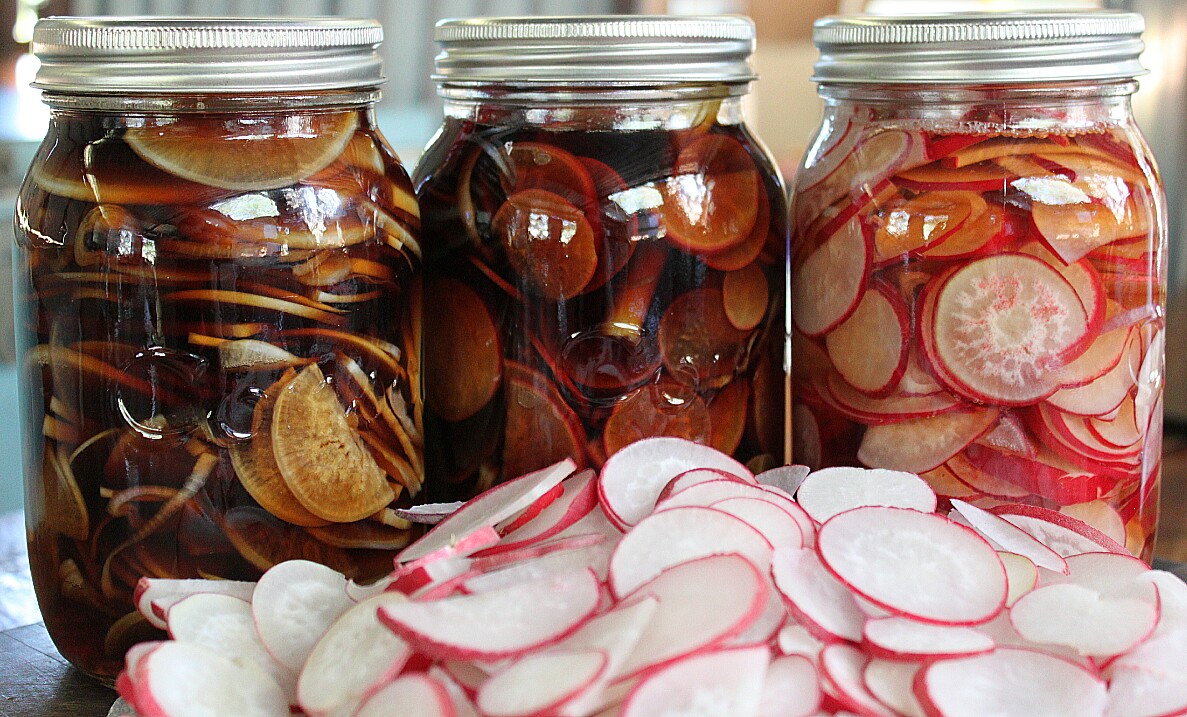 We traveled upcountry for a wedding and were gone from the farm for 10 days. In our absence the daytime temperature shot skyward, and we returned to a super-sized radish eruption. A whole bed of half-buried red, pink, white and purple radishes were pushing their way up out of the soil, screaming “pull me!” They had gone from marble to golf ball while we weren’t looking.

We adore young radishes–they are terrific in salads, and make a healthy snack when dipped into sea salt, as in French tradition-but we really don’t much like those that have passed their pull-me date. They become too peppery and woody. We also hate waste, so what to do with a whole bed that outgrew us in our absence?

As big fans of Asian fusion, I started considering an idea of creating a recipe that incorporated the crunch and heat of an older radish combined with the clean, sweet taste of the vinegar used in Japanese pickled ginger. I wanted to create this using as little sugar as possible, and remembered that a couple of months ago, in lieu of unavailable Rice Vinegar, I bought a bottle of Asian Sweet Vinegar. It resembled the black-brown of its balsamic cousin but turned out to be much, much sweeter. At some point I had also inherited a bottle of Sushi Vinegar, so using these light and dense vinegars combined with a Rice Vinegar I more recently found, I set about creating three different versions. One was made with Asian Sweet Vinegar and pink radishes, one was made with Sushi Vinegar combined with red and pink radishes, and the last was made with white radishes in a mixture of both vinegars. I added a shallot, a stick of lemon grass, a fresh chilli (seeds removed), 2 teaspoons of fish sauce, and water to both mixtures. The recipe is at the bottom of this post.

I waited 48 hours and called on Chris to adjudicate. Hands down, he said, the radishes in Sushi Vinegar came top. Not only could he taste the singular flavors of the lemon grass, chilli and fish sauce, which the dense Sweet Asian vinegar overpowered, but the red skins of the radishes suffused the Sushi Vinegar with a rose-pink blush.

These pickled radishes will be a compliment to a stir fry, Asian salads, or cold meats and cheese platters.

2. Bring the vinegars, water, lemon grass and chilli to the boil in a heavy-based saucepan and infuse the flavors, about two minutes. Remove from the heat, add the fish sauce, and remove the chilli.

3. Pack the sliced radishes combined with the shallot into the warm pickling jar.

4. Transfer the stick of lemon grass from the saucepan to the pickling jar, and pour the hot vinegar mixture over the radishes and shallot.

5. Cover the jar and cool the contents to room temperature. Store away from the sunlight, and refrigerate once the jar is opened.