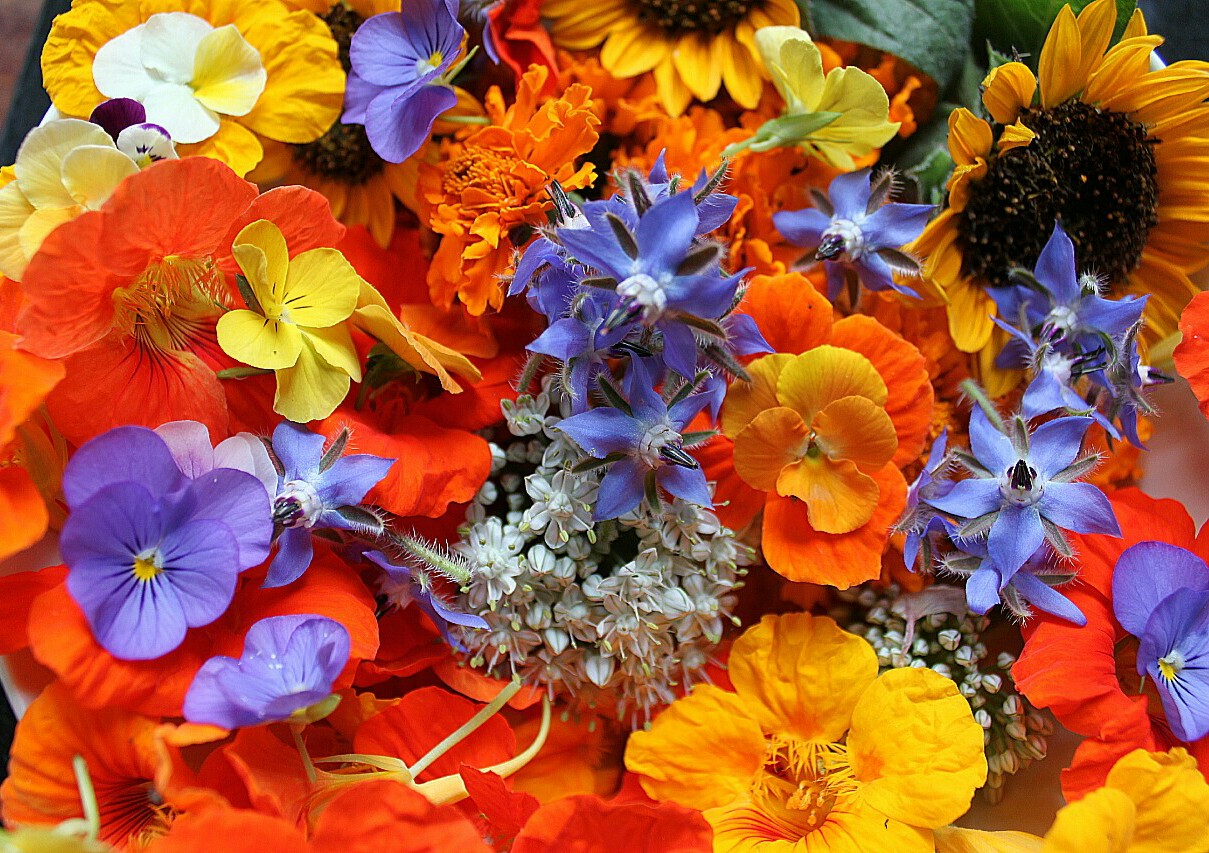 As Ralph Waldo Emerson said: “The earth laughs in flowers.” Last week I not only laughed, I rejoiced. These dazzling edible flowers pictured above led me down a path that turned into the happiest foodie adventure ever.

In the anonymity of the African bush one doesn’t expect to meet a young chef who was awarded two Michelin stars before the age of 30. And one really doesn’t expect to meet this chef here on the farm. A neighbor of ours, who brought his visiting sister and husband–a mango producer from Puerto Rico–to see the farm, encouraged a consulting chef from nearby Tongabezi Lodge to join them.

“You never told me there were so many edible flowers,” whispered the half-French, half-Spanish, born-in-Venezuela Yomar Monsalve to our friend as they walked past our vegetable garden. “I can see 12 different types out of the 23 types of flowers I use … right here!” All that was missing, he said, were the “citrics.” I told him they had just been in flower but were incinerated by the recent onslaught of summer.

Yomar’s obsessed with using edible flowers in his cuisine, and I am obsessed with learning more about his obsession. And his cooking techniques. And his cooking experiences. Which leads us back to the anonymity of the African bush. Yomar’s in the Zambezi Valley teaching Tongabezi’s cooks lots of new techniques in the hope of heightening the dining experience in one of Livingstone’s top lodges. Among other things, Yomar’s sharing with them how to intensify flavors using fresh, local ingredients (a chemistry degree comes in handy here); how to waste as little as possible; and how to present a dish that would be at home on a table in an award-winning European restaurant.

“Would you like to come and cook with us sometime?” he asked me. Ummmmm, HELLO!

I went to Tongabezi last Friday. We spent the afternoon learning new techniques while preparing a dessert we ate later, as part of a candlelit dinner on one of Tongabezi’s sampans floating in the Zambezi River. We were joined by Chris and some friends, including Ben and Vanessa Parker, the owners of Tongabezi, as well as a resident hippo.

The recipes and techniques I learned from Yomar will be spread through a series of posts, as and when I use them here on the farm. So much of what he taught us was about improvisation, imagination and magic … all conjured up in a simple kitchen alongside the Zambezi River. He showed us how to flavor oils.

He showed us how to make dried tomato tuiles.

He showed us how to make strawberry snaps to go with the tuiles.

He showed us how to present the dessert we made.

And he showed me a great place to raise a glass to the Joy of Cooking [together]. Thank you, Yomar … see you next year! (He’s off to Paris next.)