We make stock all the time, and we use stock all the time. In soups. In stews. In risotto. In quinoa or couscous. Whether it’s chicken and lamb bones left over from a roast, or the vegetable peelings set aside while preparing a grilled salad, nearly all end up in a large pot of boiling water along with a bouquet garni, bay leaves, a couple of carrots, onions and celery (if needed), and simmered for two to three hours. Once cool and strained, we portion the stock into 750ml-containers and freeze it.

Earlier in the week we made chicken stock, boiling a whole bird that had been in the freezer for some time. It made a really flavorful stock, but even better for those who hate waste, like me, all that meat was transformed into an assortment of meals. For one of our lunches, I came up with the idea of using chopped warm thigh meat in a quinoa salad, combined with vegetables, fruit and herbs from the garden.

Quinoa is not available here in Livingstone, but kind friends in America sent out a huge bag for my birthday in October. I’ve loved the nutty flavor of this ambrosial seed since the day I first tasted it on a trip into Utah’s Canyonlands National Park to participate in a vision quest back in 2009. Just seeing or hearing the word quinoa often reminds me of those sacred walls of red rocks enwombing our tents in a canyon that, I was told, was referred to by the American Indians as the Blood of the Mother. By all accounts, quinoa is Indian, domesticated by Andean people thousands of years ago. The Incas believed it was sacred, referring to it as “the mother of all grains.” Imagine that: being introduced to the mother of all grains in a place called the Blood of the Mother.

Back in Livingstone — back down to earth in the mother of all heat but continuing with the theme of ancient and sacred — I set about picking some purple hyssop flowers to use in my salad. In Hebrew, esob means ‘holy herb’, as does the Greek hyssopos. Hyssop is referred to in Psalms, Kings and the gospel of John in the bible, and was seen as a symbol of purification. I’m all for a good cleansing, but I just wanted to use its purple flowers to jazz up my salad, and add its bittersweet flavor to the fennel, sweet red peppers, spring onions, basil, mint and pineapple I’d already harvested from the garden.

To enhance the flavor of the chicken, I cooked the quinoa in some of the stock I’d made that morning. Later, when I started combining all the salad ingredients, I realized it would benefit from a crunch so I fried up half a cup of pumpkin seeds in olive oil. I also planned on including a chopped bird’s eye chilli (less most of its seeds), but forgot about it. Chris and I both agreed it would have been a welcome addition.

Yield: Serves 2-4, depending on whether it is served as a main or side dish. 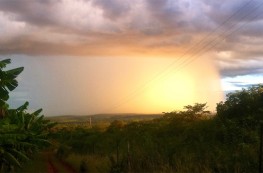 Paring down to the Essence, but without removing the Poetry