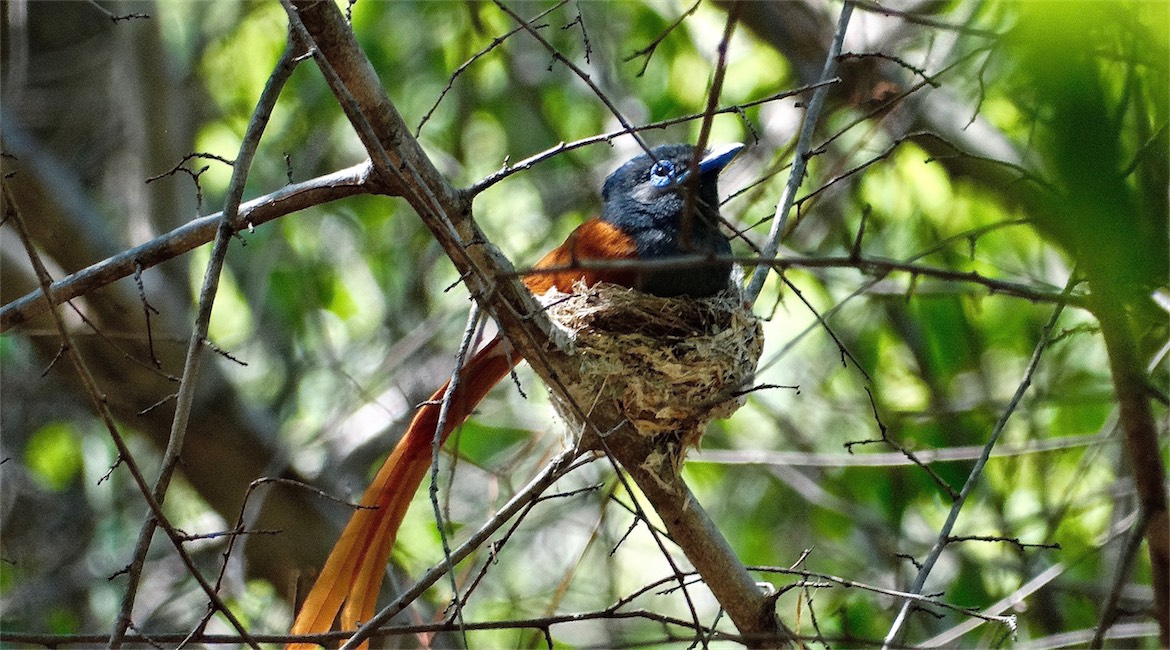 September and October for us here in the Zambezi Valley is much like it is for haute couture in Paris: it’s Fashion Week. Migratory birds in myriad colors touch down in our surrounding woodland, and taking center stage in tiny streaks of lapis blue, slate grey, and copper — the same sort of colors you’d find in the finest Hermes scarf — are the African Paradise Flycatchers.

“Yay, they’re back!” I yell, as I head outside after hearing their rippling chatter among the teak trees in our garden. Little as they are, it doesn’t take long to spot the long tails of the male’s copper-colored coat hanging beneath a branch.

In no time there are many of them, squabbling noisily over girls, bobbing up and down in courtship displays, taking baths in the horizon pool. The males are bossy little chaps, with a touch of the preening dandy about them. Yet they are also hardworking, and into equal rights: they help build the nest, they share egg-incubating duties with Mrs. AFP, and they are monogamous. (That doesn’t mean they don’t play the field; the males tend to flirt with a variety of ladies before picking the mother of his fledglings.)

Because of their diminutive size and subsequent vulnerability, African Paradise Flycatchers nest in close proximity to human habitation for protection. This means that, because we have no doors, we can watch these creative artisans building their “tiny houses” from the get-go. And believe me, it beats any design or home improvement show on television.

We’ve just watched the making of a nest in one of the lower hanging teak branches above our patio. If Chris, who is 6’6″, stretched upwards he could touch it. We saw how the flycatchers found a suitable fork among the teak branches in which they wove together bits of bark, small twigs and dried leaves with remnants of old spiderwebs for the nest’s framework. Over the next ten days or so, a perfectly proportioned eggcup was upholstered with lichen, soft grass and animal hair, all held together with sturdy strands of silk.

Breeding began in earnest after the nest was built, and it wasn’t long before Mr. and Mrs. AFP, with the help of a surrogate female or two, started incubating their eggs. They take turns sitting on the nest in half-hour shifts, and in between, catch flying insects on the wing or surprise creepy-crawlies while camouflaged behind foliage not far above the ground.

Nesting is a precarious time for these little birds because of the opportunistic predators flying, crawling, or slithering all around them. The males are fierce and noisy in defense of their territory, and comrades will swoop in to help if the threat is persistent. What is an unexpected challenge to these earnest homemakers is the parasitization of their nests by certain birds, such as honeyguides and cuckoos. Chris once witnessed this firsthand. A few years ago he watched what he assumed was a flycatcher fledgling demanding an unusually large amount of food from its exhausted parents. Over the following days the baby morphed into an avian equivalent of Billy Bunter in ill-fitting clothes. It outgrew the nest and in the end toppled right out onto the grass beneath. To Chris’s consternation, the fledgling turned out to be a Klaas’s cuckoo!

We are now anxious for signs of wide-open beaks squeaking for sustenance in the nest we’ve been watching these last few weeks. Signs of Masters and Misses AFPs, that is, not Billy Bunters. The newborn chicks should be here any day. And though it doesn’t take long for them to fly the nest, the parents continue to feed the babies for about another week. After that they’re gone. Carrying color and style to Fashion Week in another part of Africa.