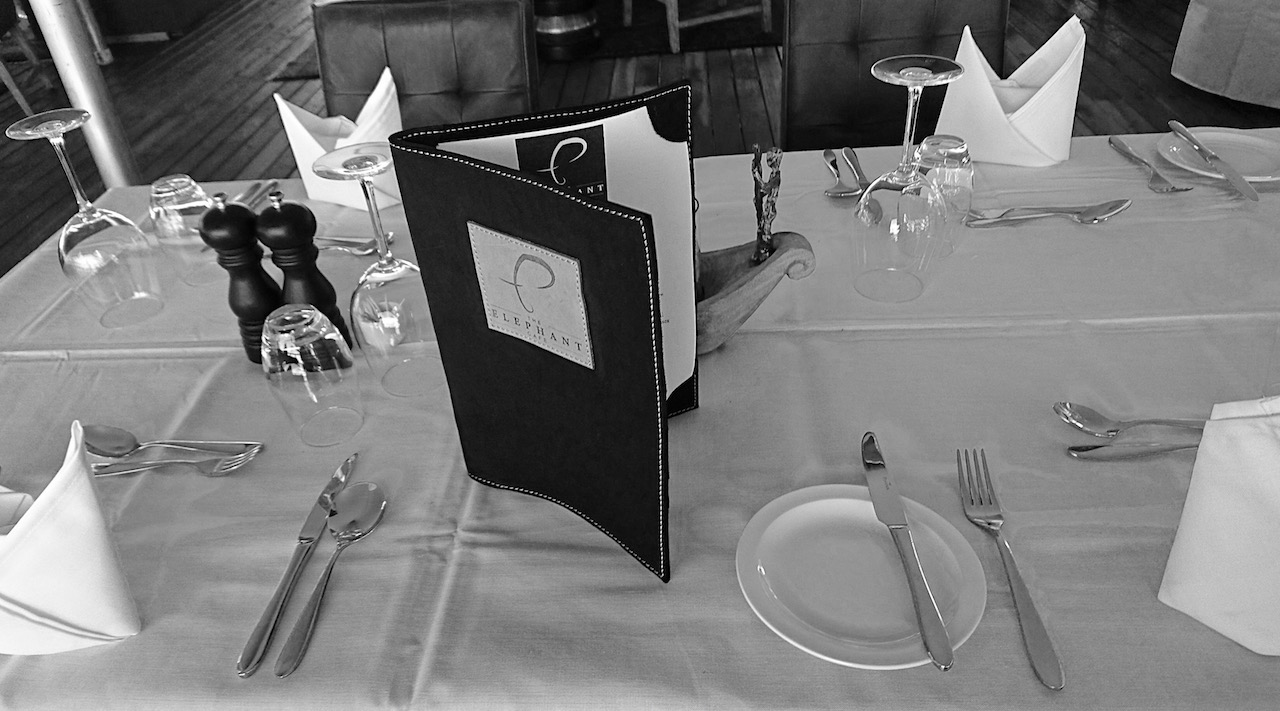 The nomination came as such a surprise. I’d neither heard of the Zambia Hospitality Awards (ZHA), nor expected any sort of recognition for The Elephant Café because we were still so new. But on October 10 we received a letter announcing we’d been nominated in the ZHA’s Best New Restaurant category, and were invited to attend a dinner at the Taj Pamodzi Hotel in Zambia’s capital, Lusaka, on October 28, where the winners would be announced.

Chris and I were unable to attend due to a prior engagement, but my colleague, David Vinton from the David Livingstone Safari Lodge & Spa, a nominee for the Hotel of the Year Zambia, went instead. Below is the photograph David sent of the trophy he collected when we were announced as the winner.

Formed earlier this year, the ZHA “is a platform that recognizes and rewards professionals working within one of the toughest and most fierce industries.” Its core function is to “improve the service standards within the hospitality industry and to give credit to establishments that go an extra mile to ensure their level of service is excellent and consistent.”

According to the ZHA’s website, each category was carefully evaluated by a panel of four professionals who “submitted an evaluation report overseas.” The winner in each category [was] “assessed over three times to ensure that the standard [was] consistent throughout. The main areas of interest for the judges were ambience, food, and service.”

The judges included Mr. David Goette, the National Culinary Arts Executive of the International Hotel School in South Africa, originally from Oregon in the Pacific Northwest of the United States. He said that “this agriculture-rich region served as the setting for my formative years, during which I was exposed to farm-fresh ingredients and nose-to-tail cooking techniques.” Mr. Goette counts himself fortunate to have eaten and cooked in restaurants all over the world, including in Dubai, London, Australia, Japan and Tanzania, to name a few.

Judges representing Zambia included Rodgers Kazembe, a seasoned hotelier with over 25 years of experience, both in-country and internationally, and Prethi Singh, who was trained in Switzerland and has eighteen years of experience in the hospitality industry, specializing in groups and incentive coordination.

Much gratitude to my team at The Elephant Café, who have all worked so hard since we opened in July, as well as to our beloved elephants and their handlers for allowing us into their lives. Extra special thanks goes to all those supporters who voted for us, as well as to the Zambia Hospitality Awards for the recognition.

Munkoyo is a wild root, which the Zambians ferment with masembe, or pounded maize, to make a traditional drink. It’s white with a sweet and sour, earthy flavor, which I guessed would work well in a panna cotta beefed up with some full-fat Greek yoghurt. I countered the sourness of the munkoyo and yoghurt with strawberry coulis, meringues and fresh strawberries. It was an unusual combination, but the restaurant guests loved it.

Yield: it depends on the size of the meringues, about 30-80.