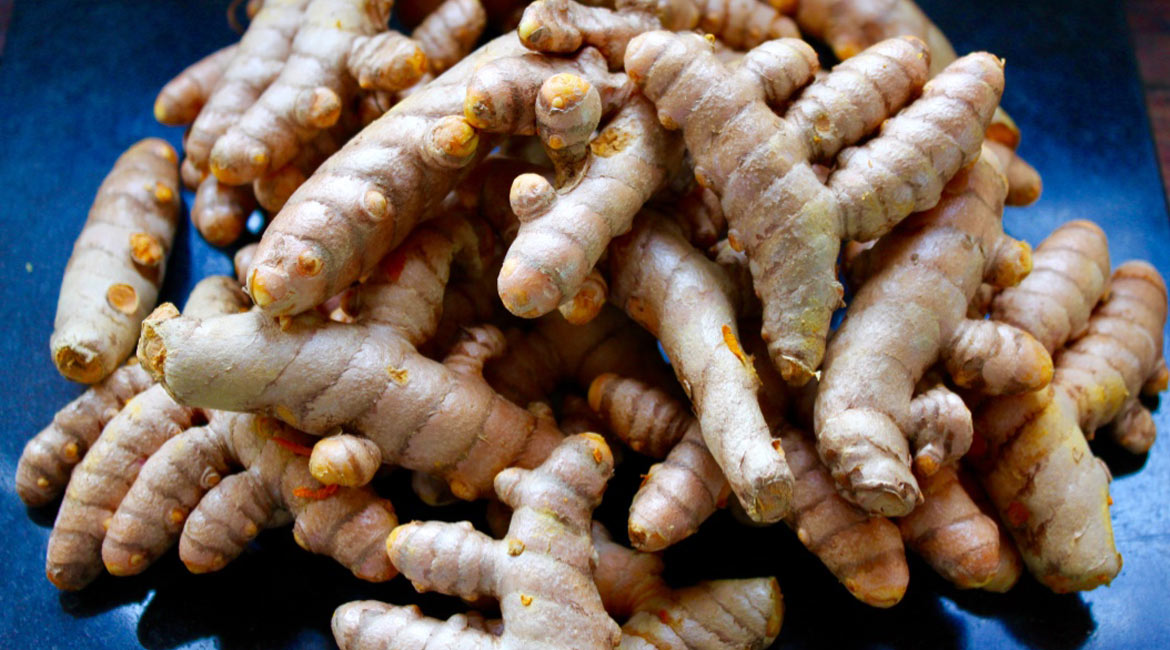 A Bounty of Ginger & Turmeric

Is there any living thing out there that doesn’t thrive on the benefits of ginger and turmeric? In the garden the plants play host to a profusion of birds, bees, and wasps … the last of which I discovered through its blinding sting while picking the scented white flowers of our galangal, a Siamese ginger. In the kitchen we use turmeric and ginger roots in curries, soups, stir-fries, desserts, and baked goods. For our health we drink a tincture of grated fresh turmeric and ginger infused in hot lemon and honey most mornings.

These two salubrious perennials are cousins. Both ginger and turmeric belong to the large Zingiberacaea family, known for its exotic flowers and digit-like tuberous rhizomes, or roots. Both are native to tropical Asia, and to my eye, this is conspicuous. Compared to our wild rosella, say, which stands in our garden all leggy and bold with crimson splashes (think Naomi Campbell), the ginger and turmeric plants hide their demure flowers, painted like Geishas, behind fans of different shaped leaves.

Chris grew turmeric in the garden before my arrival on the farm, and it was he who taught me about its extraordinary health benefits. This led to our decision to try and grow enough to last us throughout the year, so in the wet summer months we planted an additional two beds alongside three new beds of ginger. We did this by dividing and moving the roots into well-composted soil that was partly shaded by a native teak tree.

The plants grew up to be healthy and strong and when, in the early winter, the leaves began dying back suggesting it was time for us to start harvesting, we were blown away by the quantity and quality of the rhizomes we dug out of the soil.

I never expected we’d amass such a reserve, therefore my next challenge was to find the best way of preserving it. In my research I learned that both grated or sliced ginger and turmeric did well when pickled in apple cider vinegar or vodka; that unpeeled rhizomes would last for at least a couple of months in an airtight bag or container in the fridge; and that they could also be stored loose in a cool, dry, dark place like a root cellar for a good few months. In addition, ginger can be crystalized, turned into a syrup, and added to fruit preserves, which I hope to do one day.

In this instance, for reasons that involved both ease and practicality, I decided to grate and freeze most of our ginger and turmeric crop, leaving just a ziploc bag each of unpeeled roots in the fridge for our daily use. Grating the rhizomes turned out to be quite a job, with the turmeric digits turning our own digits bright orange for hours afterwards.

As you can see in the photographs, we measured the grated turmeric and ginger tablespoon by tablespoon, parceled them out on cling wrap over a baking tray, and then left them overnight in the freezer. The next morning we transferred the now rock-hard portions into large bags, dated them, and returned them to the freezer.

The best thing about all this is that we have another crateful of these medicinal miracle workers still in the ground should we run out. Such was the abundance from such a small patch, Chris is now considering growing ginger commercially on the farm. Yay!