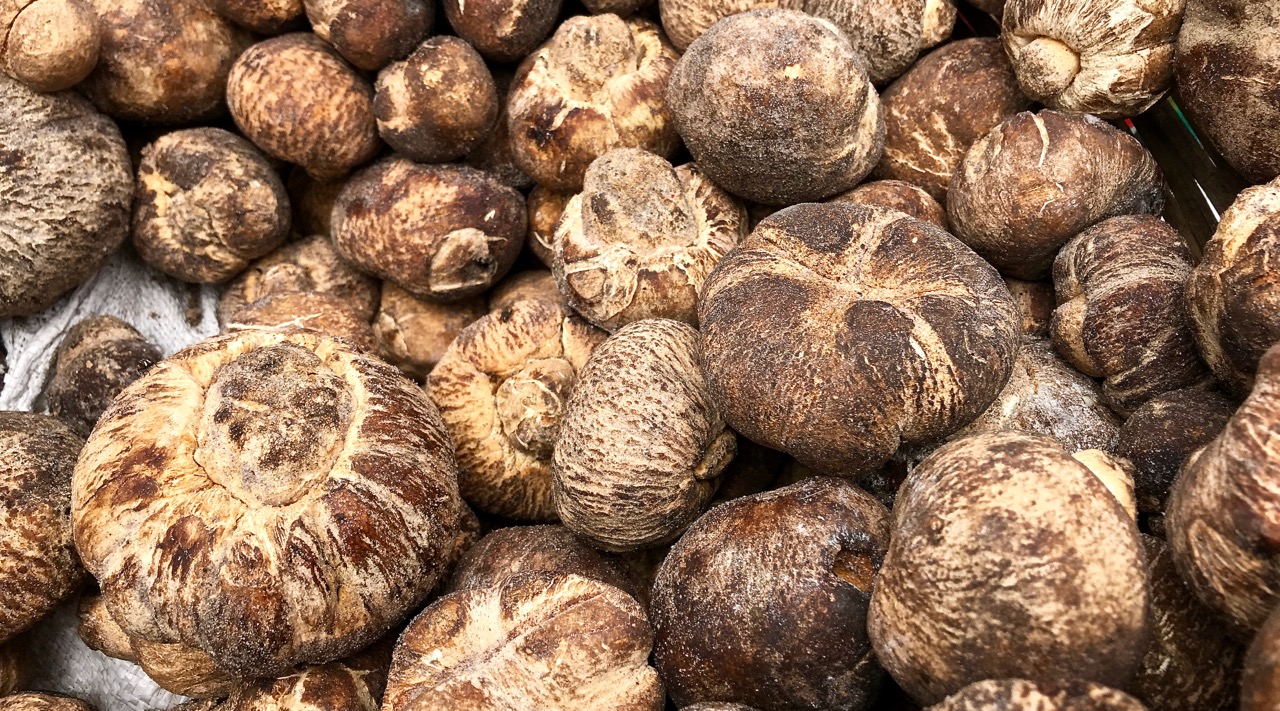 A Miscellany of Mushrooms in Mongu (including Kalahari Truffles)

I’ve just been on a voyage of discovery. And adventure. And collaboration. I’ve travelled some 1,000 kilometres northeast, another 1,200 kilometres west, and finally, 500 kilometres back home to Livingstone. What a vast, empty country Zambia is, yet it’s home to 72 different tribes. These past six-and-a-half weeks, on a food safari with Time + Tide Zambia, I’ve worked with people from three of these tribes — chiNanja, Lozi and a scatterling of Bemba — and learned a whole lot more about traditional and wild ingredients found in their neighbourhoods, many of which were entirely different from those found here in Southern Province. In the forthcoming weeks I shall be writing about this voyage: about what I learned, about what I taught, about a creative collaboration between me and my adopted home.

Perhaps the most exciting for me was finding the eye-popping varieties of wild mushrooms in Mongu, the capital of Western Province, which balances atop the eastern edge of the Barotse Floodplain of the upper Zambezi River. Here on the farm I’m used to eating just two types of edible wild mushrooms that grow in the bush surrounding our house. I’m also aware of an additional two varieties found further north of Livingstone, one of which can grow to the size of a bicycle wheel. What I didn’t know was the sheer diversity in colour, texture and size of edible wild mushrooms found in the unique ecology of Western Province, with its prize find, at least for me, being the Kalahari truffle.

“These mushrooms grow underground,” Charity Mushokabanji, helping me shop for fresh ingredients in Mongu market, casually mentioned as we passed a vendor surrounded by basket-loads of truffles. “I know,” I responded quickly, “and I’ve been looking for them for years!” Known as “sondwe” by the Lozi people (or liondwe, if more than one), Kalahari truffles aren’t as potent as their European relatives, but they are meaty and mushroomy, like a portobello, and leave a lingering punch of heat after each mouthful. They flourish in arid Kalahari sand following the region’s short rainy season in March/April and, I was told, are found by “feeling the soft indentations in the sand beneath your feet as you carefully gather.”

In underdeveloped areas in Zambia, as I read here, protein-packed “edible wild mushrooms are an essential component of the people’s diet during the traditional ‘hunger months’. … In most years there is a peak of abundance and species diversity in December when few ‘bush’ foods are available and crop plants have not yet matured. In a survey of nutrition in a central area of the country, mushrooms were found to be second only to edible insects (mostly caterpillars) as the commonest main ingredient of village meals during the period November to January, and such subsistence economies, and food preferences, have altered little over the years.”

There’s a part of me that takes issue with the terms “hunger months” or “famine food”, to which often the wild edibles are referred, because it’s as if these ingredients are beneath those people who can afford to shop in any season in Western-style grocery stores. Wild or indigenous food is often looked down upon by the so-called affluent, who instead purchase sugar-laden, processed foods and drinks, chemical-laden fresh produce, and dairy and meat laced with antibiotics from foreign supermarket franchises dotted around Zambia, all of which are contributing to a growing diabetes epidemic.

For this reason, it gave me real pleasure feeding Zambia’s Ministers of Tourism and Works & Supplies, who were guests at Time + Tide’s King Lewanika Lodge when I was there training the chefs in my bush gourmet cuisine. Together, we presented the following menu made with wild and locally-grown fresh ingredients bought from Mongu Market: Sikuswani Soup with Sikuswani Chip Sticks & Warm Ciabatta Bread; Seared Beef Fillet with Creamy Liondwe & Mwambwa wa Lindondwe Mushrooms, Pan-fried Green Beans with Roasted Cashew Nuts & Buttered Sweet Potatoes; and Munkoyo Panna Cotta with Guava & Muchingachinga Pureé on a Mongongo Nut Florentine. When I visited their table at the end of the meal, both Ministers expressed genuine delight in the food, not only because it was wholly Zambian, but because it reminded them of flavours they hadn’t eaten since they were young boys at the feet of their grandmothers.