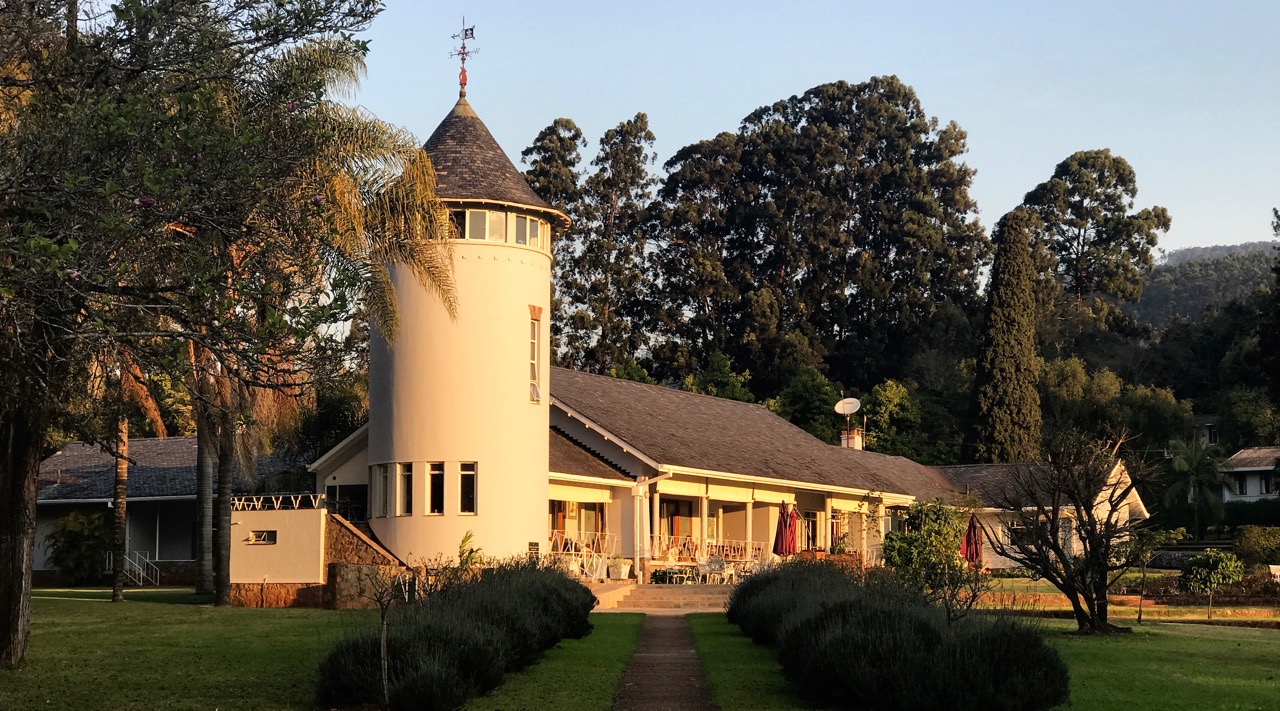 The only noise that distracted us during our short stay at La Rochelle Country House in Zimbabwe’s eastern highlands was that made by the birds. Myriad species, mostly unfamiliar to me, trilled us out of bed, welcomed us on walks around the garden, and serenaded our meals on the verandah. Their diversity is a joyful result of the Shangri-la environment in which they breed and live: a twenty-acre botanical garden filled with exotic plants and trees, set among indigenous bushlands, situated in the wet and fertile Imbiza Valley beneath hills lining the border with Mozambique.

La Rochelle, once the private home of the British philanthropist Sir Stephen Courtauld and his Italian wife, Virginia, is a utopian retreat with an enchanting history. Sir Stephen, a wealthy war hero forever affected by the brutality of the First World War, and the glamorous, gregarious Virginia, were a fixture in London’s high society, who sailed the world in their luxury yacht before buying a twin-engine aircraft to fly from Cairo to Cape Town in 1949. While visiting the eastern border town of Mutare they flew over the Imbiza Valley and shortly thereafter bought a rundown market garden farm on which to settle.

The house they built, according to Professor of Architecture A.C.D. Hyland, “is a rare example in Africa of a major early Modern Movement private house, and almost unique in Zimbabwe, given the quality of its architectural detailing and of its interior decoration….” The gardens they forged from the valley’s fertile soils, streams, and its relatively kind climate, are legendary.

At La Rochelle the Courtaulds hosted artists, writers, musicians, governors, prime ministers, nationalist revolutionaries, among others, many of whom signed their names with a diamond stylus on two huge plate glass windows, still preserved in the sitting room today. In the surrounding gardens, the Courtaulds planted herbaceous borders, a terraced rose garden, and countless exotic trees. They created ponds and water features, a pergola of classical columns, internationally-renowned orchid houses, a flower-filled dell in a valley with pathways leading to an ornamental pond, and a vegetable and herb garden to serve the kitchen’s needs.

It was the latter that I was most interested in after Harvey Leared, a childhood friend, who, in a partnership with the National Trust of Zimbabwe (to which the estate was bequeathed in 1972), set about redeveloping La Rochelle in 2014 into “a creative nexus of educational, cultural and environmental excellence,”  asked me to consider assisting its chefs in creating a menu centred around the gardens and locally-grown produce.

The grounds are now home to a commercial organic herb farm, grown mostly for export to Europe. The original vegetable garden, meanwhile, was dug up a few years ago because of the rigorous regulations associated with the export project, and is scheduled to be replanted in the terraces behind the kitchen in the weeks ahead. That didn’t stop us from harvesting what organic herbs and edible flowers were available, which were used in three vegetarian dishes Harvey asked me to create for a Buddhist retreat La Rochelle was hosting the weekend after our stay.

In addition, Regis Muchenje, the hotel’s food and beverage manager, accompanied us to Sakubva market in nearby Mutare in which we discovered a multitude of dried beans, pulses, grains, seeds, roots, and fresh vegetables, all grown or harvested in the eastern highlands of Zimbabwe. The variety was more extensive than I’d ever seen in Zambia, and were also used in all the vegetarian dishes we created.

By supporting the vendors at Mutare’s Sakubva market, we were channeling Sir Stephen and Lady Virginia’s sincere commitment to uplifting and enriching the surrounding rural communities, in particular the women. I like to think the two of them were smiling down on us while watching the unmasked enthusiasm of the hotel’s chefs transforming their own indigenous food into vegetarian-forward dishes, packed with nutrients and the inimitable flavors of the land that once fed themselves, their illustrious guests, and their souls.