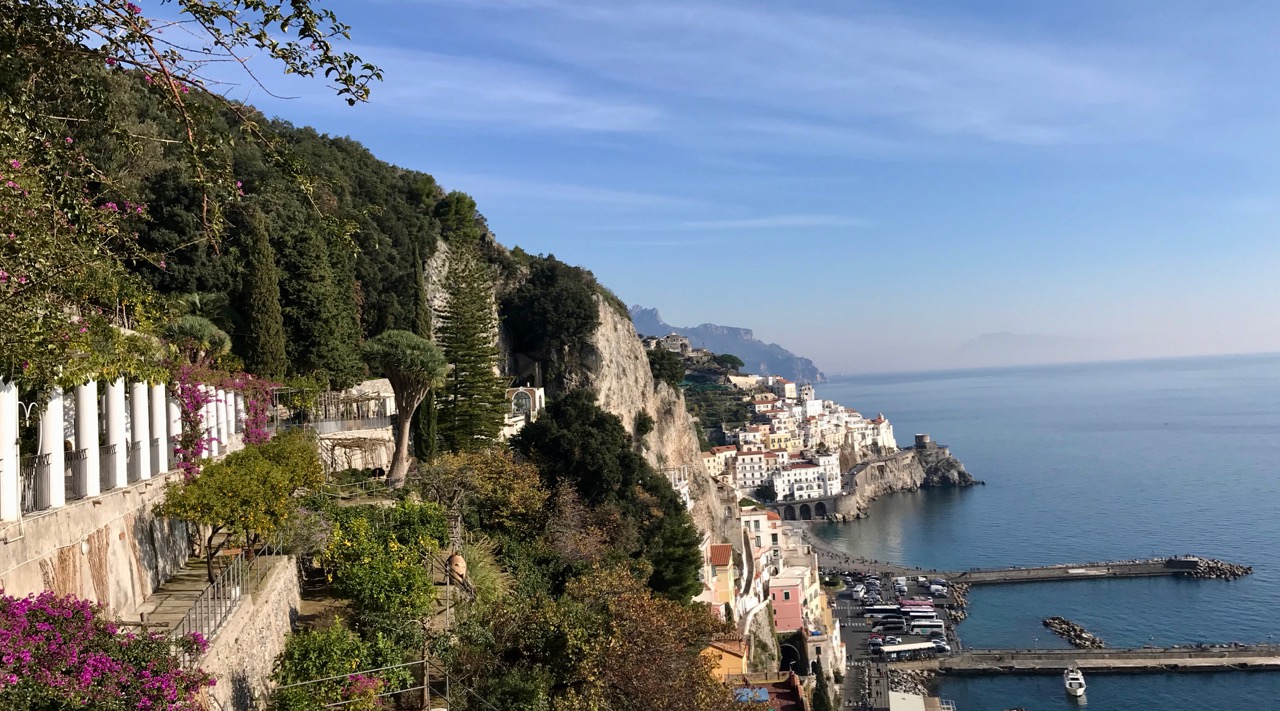 The Land Beyond the Sea … Amalfi

I once read that in the Celtic tradition monks and warriors undertook “incredible journeys of imagination and spirit.” Having just returned from Amalfi, a wondrous Italian coastal town originally built by monks and warriors, I don’t think this tradition was necessarily specific to the Celts. With its Roman Catholic monasteries suspended high between mountain and sea; with its stone watchtowers squatting strategically along its coastline; with its fragrant terraces of lemon groves anchoring the earth on which churches and cemeteries and houses stand aloft; with its medieval cathedral, adorned by Norman-Arab-Byzantine overlays, grandstanding in the central piazza, Amalfi’s monks and warriors undertook journeys of imagination and spirit in a way so stupendous, I find it challenging to articulate.

Chris and I, in a rare flight of fancy ourselves, travelled to Amalfi to celebrate Christmas and New Year. We hired a car at Naples Airport, somewhat naïvely as it turned out, for the road to Paradiso wasn’t built for those escaping the quotidian, like us. Rather, it was designed for those daring souls conquering the twelve steps of The Hero’s Journey, or macho Italians delighting in the twists and turns and dangers of skinny Roman roads carved out of the side of dramatic coastal cliffs hundreds of feet above the Tyrrhenian Sea. We’d quickly learn that the only cars in Amalfi without scrapes down each side belonged to people like us who, for the most part, arrived, parked, and used our two legs or public transport to explore the area. (On a rare occasion when we ventured out on our own we came to a standoff with another turista-driven vehicle too scared to move, ensuring we didn’t leave town without our own car-scraping experience.)

Travelling to Amalfi in winter turned out to be an inspired choice. The town is home to five thousand residents, who on any summer’s day play host to twenty-five thousand mostly foreign tourists. How this little town, squashed into the vertical sides of the Monte Cerreto, connecting this way and that by steep, narrow stairways, hasn’t collapsed in on itself with the weight of all those visitors every summer is a marvel. In stark contrast, the few people we passed on the streets before and after Christmas were mostly black-clad shuffling nonnas on their way to or from Mass, while the alleyways around the piazza filled up with local residents haggling over the perfect piece of fish for Christmas Eve dinner, and those looking for last-minute gifts for a loved one. New Year was busier by far, but mostly with Italians escaping the colder climates in the north. If I have one takeaway to pass on to anyone interested in visiting Amalfi, travel in winter. It’s far less crowded and half the price.

Chris and I had little time to research where we were heading for our holidays. All we’d booked were our flights and accommodation. This, too, turned out to be a fortuitous decision. Our generous hosts were the Civale family, residents of Amalfi for many generations and owners of the B&B, Al Pesce D’Oro, in which we stayed. Alessio Civale booked or guided us to each and every indelible experience we had during our ten-day visit. (We chose this B&B because of its well-regarded traditional fish and seafood restaurant, run by another branch of the Civale family, in which I ate one of my most memorable dishes created by their grandmother: Spaghetti al Cartoccio di Conchetta.)

Most of our experiences involved food, of course, for which the Amalfi Coast is renowned: fish and seafood caught fresh from the Gulf of Salerno, fruit and vegetables ripened to their peak by the Mediterranean sun, preserved meats and cheeses from the Lattari mountains, the backbone of the peninsula. From my first mouthful I understood that the road to Paradiso was worth every blind hairpin bend and vertigo-inducing cliffside scare. The food was sensational.

Then there were the lemons and limoncello. Grove upon grove of Sfusato d’Amalfi, the large native lemon with a perfect nipple, prized for its low acidity and delicate flavour, which has perfumed the air of Amalfi since the 11th century. Lemon growers are the custodians of the environment along the Amalfi coast, according to Salvatore Aceto, scion of Amalfi’s most famous lemon garden. Landslides would be a genuine threat to the town if the groves were to be abandoned, as he told us on a private tour of his gardens; for the ancient roots of the lemon trees anchor the town to the mountainside, while the dry stonewalls of the terraces hold the much-needed rainwater, allowing the surplus to drain away. The pergolas that espalier the lemons are bound together with willow branches, all of which are protected from frost by swathes of shade cloth through the winter months.

A dear Italian friend of ours, Antonella Bussi, and her American husband, Michael, travelled down by train from Milan to ring in the new year with us. After seven days à deux, it couldn’t have been more perfect. We were guided once again by Alessio to Torre Normanna in the neighbouring town of Maiori for New Year’s Eve. A restaurant tucked inside the cylindrical 12th century Norman watchtower in the sea, reached only by a footbridge, we were welcomed by Gino, Massimo, Daniele and Ivano Proto, four brothers who have run it since 2007. Not only were we presented with a fine dining menu of hyperlocal traditional cuisine, we were entertained by live traditional Italian music in which we all took part. At midnight we were afforded a panoramic view of the fireworks along the Amalfi coast from the ramparts, and afterwards we danced the night away with high-spirited Neapolitans visiting from the big city. Champagne flowed, we toasted in 2019, and for Chris this was the crowning glory. He loved every minute of it.

For me, I loved it all. The people, the food, the place. It’s no wonder the Amalfi Coast was part of Europe’s Grand Tour and an attraction to 19th-century artists, writers and scholars looking for inspiration. I read somewhere that in Amalfi “nature seems to have perfectly adjusted to the idea of the town nestled in the ravine of the Valle dei Mulini and set alongside the sea.” Henry Wadsworth Longfellow illustrates this in his poem Amalfi, which he wrote when he stayed there in 1850. The remains of the mill to which he refers in his poem are still there, visible from high above in Salvatore’s lemon garden.

Sweet the memory is to me
Of a land beyond the sea,
Where the waves and mountains meet,
Where amid her mulberry-trees
Sits Amalfi in the heat,
Bathing ever her white feet
In the tideless summer seas.

In the middle of the town,
From its fountains in the hills,
Tumbling through the narrow gorge,
The Canneto rushes down,
Turns the great wheels of the mills,
Lifts the hammers of the forge.

’Tis a stairway, not a street,
That ascends the deep ravine,
Where the torrent leaps between
Rocky walls that almost meet.
Toiling up from stair to stair
Peasant girls their burdens bear;
Sunburnt daughters of the soil,
Stately figures tall and straight,
What inexorable fate
Dooms them to this life of toil?

Lord of vineyards and of lands,
Far above the convent stands.
On its terraced walk aloof
Leans a monk with folded hands,
Placid, satisfied, serene,
Looking down upon the scene
Over wall and red-tiled roof;
Wondering unto what good end
All this toil and traffic tend,
And why all men cannot be
Free from care and free from pain,
And the sordid love of gain,
And as indolent as he.

Where are now the freighted barks
From the marts of east and west;
Where the knights in iron sarks
Journeying to the Holy Land,
Glove of steel upon the hand,
Cross of crimson on the breast?
Where the pomp of camp and court?
Where the pilgrims with their prayers?
Where the merchants with their wares,
And their gallant brigantines
Sailing safely into port
Chased by corsair Algerines?

Vanished like a fleet of cloud,
Like a passing trumpet-blast,
Are those splendors of the past,
And the commerce and the crowd!
Fathoms deep beneath the seas
Lie the ancient wharves and quays,
Swallowed by the engulfing waves;
Silent streets and vacant halls,
Ruined roofs and towers and walls;
Hidden from all mortal eyes
Deep the sunken city lies:
Even cities have their graves!

This is an enchanted land!
Round the headlands far away
Sweeps the blue Salernian bay
With its sickle of white sand:
Further still and furthermost
On the dim discovered coast
Pæstum with its ruins lies,
And its roses all in bloom
Seem to tinge the fatal skies
Of that lonely land of doom.

On his terrace, high in air,
Nothing doth the good monk care
For such worldly themes as these.
From the garden just below
Little puffs of perfume blow,
And a sound is in his ears
Of the murmur of the bees
In the shining chestnut-trees;
Nothing else he heeds or hears.
All the landscape seems to swoon
In the happy afternoon;
Slowly o’er his senses creep
The encroaching waves of sleep,
And he sinks, as sank the town,
Unresisting, fathoms down,
Into caverns cool and deep!

Walled about with drifts of snow,
Hearing the fierce north-wind blow,
Seeing all the landscape white,
And the river cased in ice,
Comes this memory of delight,
Comes this vision unto me
Of a long-lost Paradise,
In the land beyond the sea.