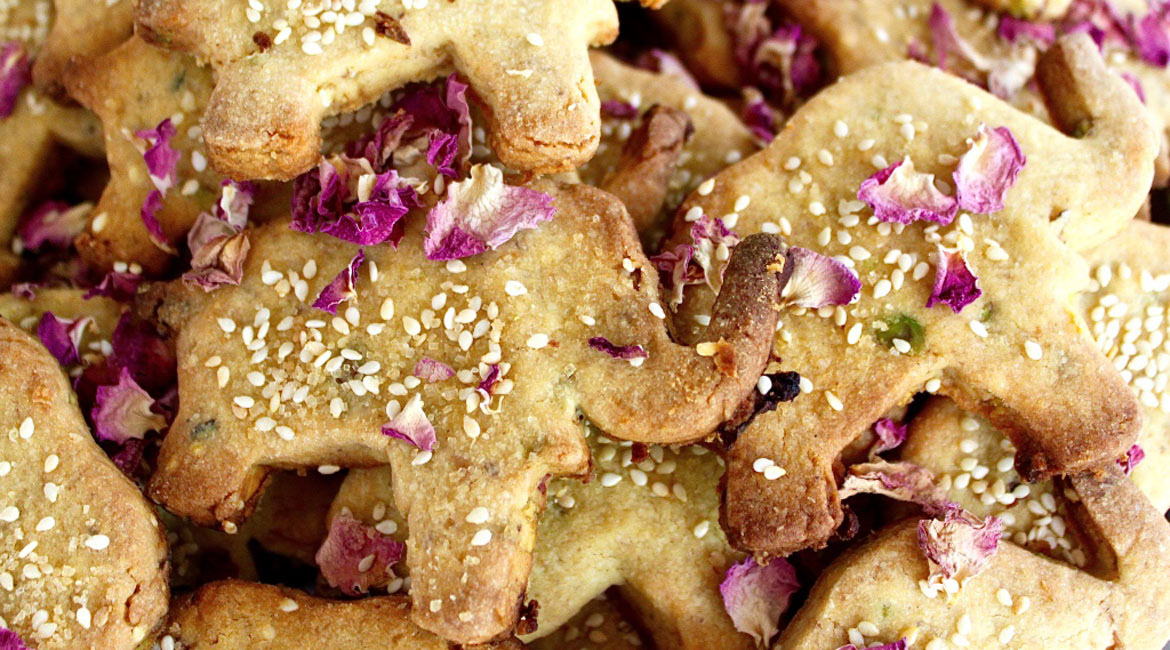 In the Kalahari Desert I used to work near Chapman’s Baobab, which is said to be the third largest tree in Africa. Its time-worn canopy not only provided shelter for 19th century explorers like David Livingstone, its 25-meter-round trunk was used as a post office and depot for traders and travelers moving in and out of the interior.

The baobab is sacrosanct to the people of the Savannah. It is treasured for its longevity and its ability to survive long periods without water. The tree is also prized for its usefulness: its hollowed trunk is used for shelter and a sacred burial chamber; its fibrous bark used for cords, cloth and fishnets; its leaves eaten as a vegetable relish; its seeds a source for vegetable oil.

And then there’s the baobab fruit. Contained in a velvet-skinned pod the size of a lady’s clutch bag, powder-dusted seeds are held together like pieces of a puzzle in a netting of coral pink fibre. The fruit’s fragrant powder has the texture of sherbet and is tart, like a lemon. I recently read that it has six times the amount of antioxidants found in blueberries, six times the amount of Vitamin C in an orange, and six times the amount of potassium in a banana. Its status as a “super fruit” has grown in recent years, especially in Europe after it was approved as a food ingredient in 2008, and then in the United States the following year.

It’s long been thought that baobab fruit powder is cream of tartar. It is, in fact, a substitute for cream of tartar, which is a by-product of wine-making.

I’ve been longing to experiment with baobab fruit, and have waited all year to harvest from a tree growing near the turn-off to our farm. Harvesting them is no easy feat. The tree is huge, and most of the low-hanging fruit have already been eaten by elephants. Still, Adelina, through her network of helpers, brought me seven ripe fruit the other morning, and shortly after, our R&D department (recipe development) got to work.

Traditionally, baobab fruit powder hasn’t really been used in anything other than drinks or porridge. But right from the start I had in mind to bake with the fruit powder: petit fours, a cake, cookies, a cream pie with a pecan nut crust. I also planned to use it together with rosewater, a gift from a friend, because I felt sure the rosewater’s fragrance and flavor would offset the baobab fruit’s jarring acidity.

While perusing ideas on the internet, an email from Heidi Swanson’s 101 Cookbooks dropped into my inbox with a recipe for Rosewater Shortbread. I saw this as a sign, and looked no further. I adapted Heidi’s Rosewater Shortbread recipe, adding the baobab powder, and replacing the pecan nuts with pistachio nuts. I don’t grow roses here, so I was unable to add any dried rose petals to the dough. Instead I increased the amount of rosewater, but wished I’d had the petals. They would have added much-needed Christmas color to the cookies. As it was, I had to settle with using fresh violet-colored borage flowers as a garnish instead.

*Note – my recipe below includes dried rose petals because, having subsequently made the cookies with them, I concluded they are a much-needed ingredient.

Yield: Between 20-30 cookies, depending on the shape and size.

On our recent holiday in Australia, I not only bought some dried rose petals, but also a cookie cutter in the shape of an elephant. I made another batch of cookies a couple of weeks ago, and wanted to share a photograph of the result. My original thought that the cookies would look and taste better with rose petals was correct.
March 31, 2015.