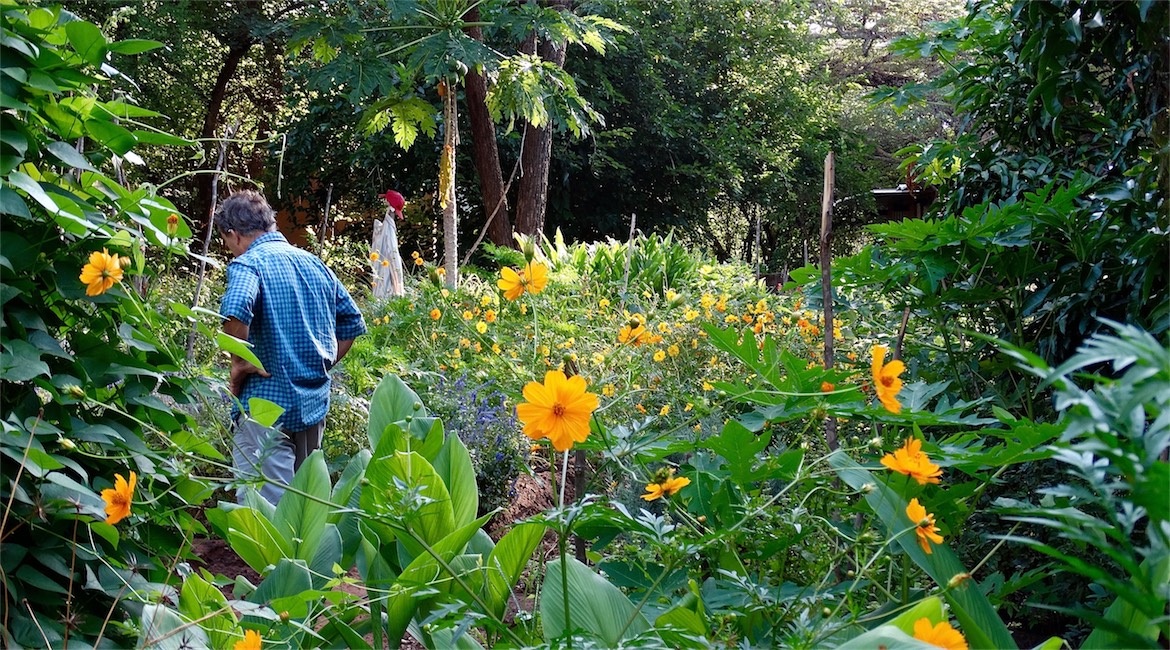 How do you explain companion planting to a visiting geologist, in other words, “a scientist who studies the solid and liquid matter that constitutes the Earth, as well as the processes and history that have shaped it?” I could have fetched my smart phone and read out its definition: “Companion planting (noun) – the close planting of different plants that enhance each other’s growth or protect each other from pests.”

Instead, on a stroll together through the garden a few days ago — the geologist’s warm approval of the quality and quantity of the vegetables and fruit encouraging me onwards — I told him how we planted seeds and seedlings together that were known to be happy bedfellows, that were generous hosts, that encouraged cross-fertilization, and that did battle with the baddies. My explanation, I later realized, must have sounded like a vegetative Mills & Boon rather than a practical gardening guide.

Go on to where exactly? As far as I knew, companion planting was questionable as a science and more about storytelling and folklore, passed down from generation to generation. I’d read that it dated back thousands of years and had been practiced by peoples as diverse as the Native Americans and the Romans. Which is more or less what I told John the Geologist, with the added eyebrow-raiser of saying that the process, I felt, was largely intuitive.

As you can see, I’m more HRH Prince Charles’s School of Plant Communication than Charles Darwin’s Theory of Evolution.

American freelance writer, Claire Brandt, in her article The Three Sisters Legacy: The Science Behind Companion Planting, tells the story of how the North American Iroquois tribe discovered that three crops grew better when planted together. “According to Iroquois legend, corn, beans, and squash are three inseparable sisters. …” Even without the scientific awareness to understand why these companions thrived, Brandt wrote that the tribes passed on the knowledge—through stories and annual rituals—that corn, beans, and squash should always be planted together.

“And [today] this makes sound environmental sense: the beans and corn have a symbiotic relationship in which the corn provides a support for the beans to grow up.  In return, the beans provide extra support for the corn in strong winds.  The squash adds to this partnership by providing ground cover to both conserve water and repress weeds.  In addition, although corn is a hungry feeder, beans (as all legumes do) take nitrogen from the air rather than the soil during the growing season, and so don’t compete for nutrients.”

Although our vegetable garden is more chaos than order, it is highly productive and, on the whole, healthy. While we augment the soil with compost, chicken manure, tobacco scrap, and worm castings, we use no chemicals at all. Walking through a tangle of vegetables, flowers and herbs — planted in prepared beds, but venturing into pathways and up trees and branches, or contained in cages of sticks and chicken wire — you will find, among others, turmeric growing up through the pepper dews; squash vines crawling through the sweetcorn; onions and leeks towering above carrots and beets.

Delicate greens, like certain varieties of lettuce, are planted in the shade of native trees during our summer to protect them from the intense heat and often ferocious rainstorms. Right now our teak trees are alive with the humming of bees feasting on nectar from hatstands of violet flowers that grow atop the trees’ canvas. Just imagine the good those bees are doing for all the plants growing beneath?

Brandt, in the same article, confirmed that what has been scientifically proven is that some plants “produce chemicals that appear to repel herbivorous pests.” I grow a number of strong smelling herbs for exactly this reason. Herbs like common sage and oregano, which I use in so many ways in the kitchen, produce the chemical thujone, which enables them to keep the bad bugs at bay from the surrounding plants in their vicinity. Add to this Sweet Annie (Artemisia annua), which has a scent so strong I have planted it as a border around parts of my vegetable garden. White fly, that nasty tomato-loving bug, is said to succumb to an instant fainting spell the moment it smells Sweet Annie. (As an aside, it’s also been used in Chinese medicine for thousands of years and its chemical, artemisinin, is a potent anti-malarial agent.)

Khakibos, or Mexican marigold, was transported to South Africa in horse feed and bedding during the Boer War at the turn of the last century. This invasive warrior plant, along with with many of its cousins in the marigold family, combat root-knot nematodes, one of the more serious problems in our Kalahari sand soil. Nematodes are small, microscopic worms that attack the roots of many vegetables, reducing both the yield and quality. Khakibos, and most marigolds, produce substances detrimental to nematodes and act as a trap crop. The nematodes enter the plants and are killed because they are unable to set up successful feeding sites. In our garden we also dig fully-grown khakibos and marigold plants back into the soil as “green compost.”

Proven or not, companion planting, at least on this small patch, works. And John the Geologist agreed, even if he never fully grasped my esoteric explanations. When I later asked our garden manager, Peter Komanyana, his thoughts on the matter, he said, “This year, for the first time, nothing is stinging the squash and making them rot, we have no aphids, and we have no caterpillars on the greens.”