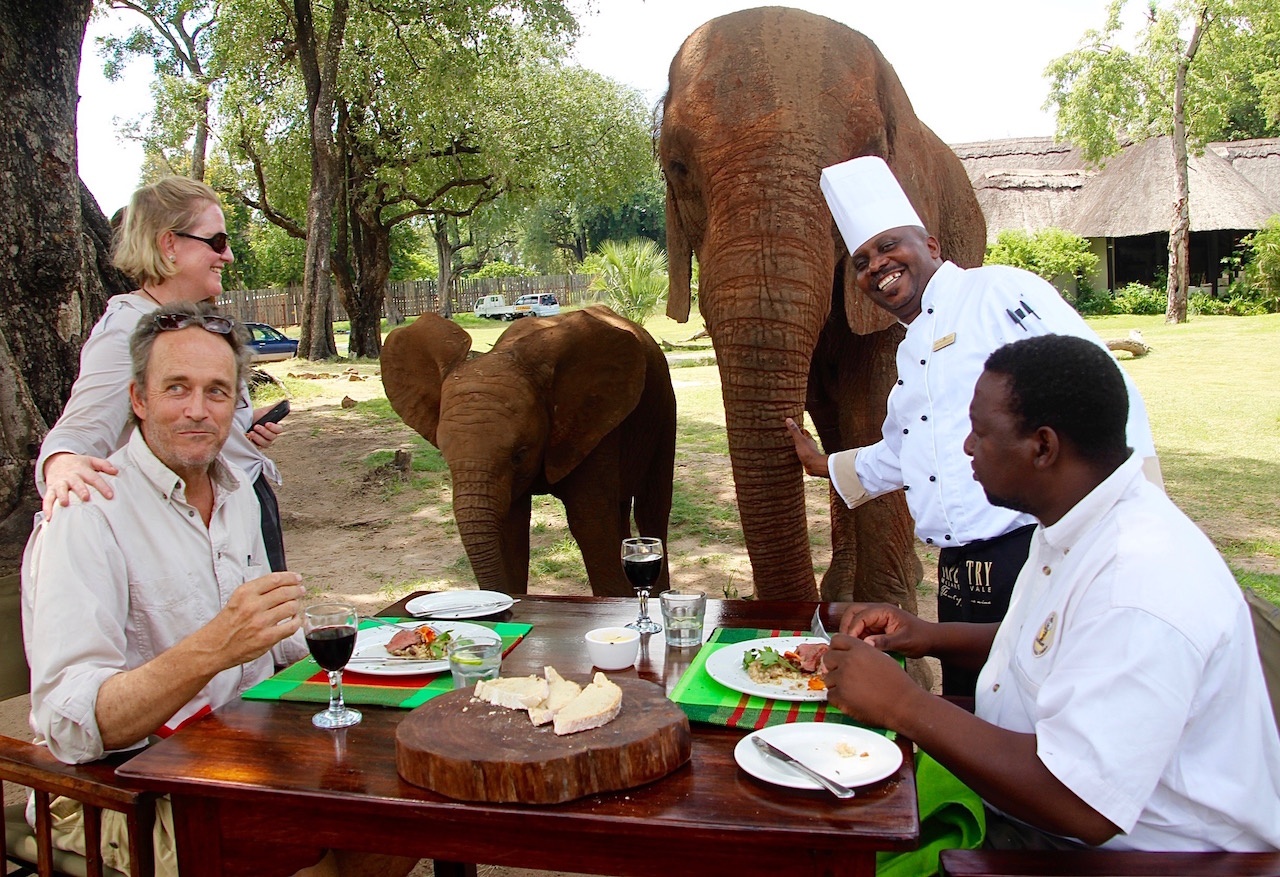 Feeding Time with the Elephants

When The Cook’s Cook magazine in the United States asked me to contribute a feature story to its GREAT OUTDOORS issue, I was unaware then that this commission — one that had followed many before it — would take me down a path to a brand new foodie adventure. I never knew that by asking permission to cook among a herd of resident rescued elephants, living near a picturesque bend in the Zambezi River not far from our farm, it would lead me into a joint venture with regional tourism giant, Safari Par Excellence, in opening The Elephant Café in which I’ll be showcasing my food, made from locally-produced and wild ingredients foraged from the surrounding bush.

I have reproduced the story below, especially for those readers with slow internet connections. You can also click here to read the original story published at the beginning of June in The Cook’s Cook magazine.

Tom Chavakho, his salt-and-pepper hair hidden under a modish felt trilby, bent down slowly to mark out the piece of ground he’d dug for his bush oven using the sharp end of his jamba. Slightly stooped, a well-worn white uniform flapping loose on his thin frame, Tom concentrated on measuring the hole exactly, using black sisal string, but was interrupted by Clover, a manager at Zambezi Elephant Trails, who’d watched him with a look of concern. “I think your oven may be a little too close to the water,” she warned. “We have an eighteen-foot resident crocodile living near there. We don’t want to feed him, too.”

Tom repositioned the site for his oven next to Adelina Banda’s mbaula, a small charcoal-filled metal brazier. Adelina has lived in Livingstone near the Zambezi River for much of her life. I’d asked both of them to help me cook an outdoor gourmet lunch, set amongst a resident herd of orphaned and rescued elephants. Tom had traveled by bus all the way from the rural area in which I grew up in Zimbabwe; Adelina was my Zambian sous chef.

It was my partner, Chris, who suggested I invite Tom to our farm in the Zambezi Valley to teach me all he knew about cooking in the bush. Earlier in our relationship, when I began conjuring up recipes using wild food, I’d told Chris about a roast leg of pork Tom had cooked “in a hole in the ground while on safari with my parents in the 1980s.” Smokey, succulent, fall-off-the-bone meat served with guava jelly and roast potatoes. It’s been one of my most enduring food memories, and a method I’ve wanted to learn ever since.

Tom was trained as a teenager in the 1950s by his own father in an African farm kitchen, managed according to upper-class British sensibilities. The owner of the farm, an elderly English bachelor called Peter Vining, employed my widowed mother as a housekeeper for a year after she emigrated from Kenya in 1971 with my two elder brothers and me. In this most un-African of farmhouses, with its dimly-lit dining room filled with antiques and silver, the waiters wore burgundy fezzes, floor-length white kanzus, and white gloves, while the kitchen staff wore chef hats and uniforms.

Tom told me that twice a year he and his father had accompanied Peter Vining and his friends on hunting safaris in the Zambezi Valley. The men traveled all day in an old Ford truck along dusty, corrugated roads that led down a steep escarpment into the miraging heat of the valley floor. A lorry, packed high with camping equipment, followed behind. When they reached the Zambezi River, they cleared the bush and built a camp. Makeshift stations for ablutions were constructed a short distance away, while long kitchen tables and galvanized tubs for washing dishes were set out in the shade of a large winter thorn tree. A kitchen fire was lit using mopane, a hard, heavy wood that burned slow and hot, which would be kept alight for the entire six-week safari.

There had been no refrigeration. Long canvas bags and plastic containers were filled with water and frozen into ice blocks before leaving the farm; small canvas bags were used for holding and carrying water while the men went out hunting each day. A large insulated box with a hole drilled out of the bottom was used for cold storage. The hole provided drainage for ice water, to ensure the block didn’t melt all at once. A root cellar for vegetables like carrots and potatoes was dug deep in the dry, cool river sand, while a small vegetable patch was planted with cabbages, spinach, lettuce and cauliflower that had been dug up from their garden beds on the farm. Onions and garlic were hung from a tree branch above the kitchen tables. The vegetables could last over a month this way, as long as there were no monkeys and baboons. The appearance in camp of these relentless, wily pests determined whether or not greens would be served at dinner. The men mostly ate what they shot, and left it to the camp cooks to turn what they brought home into a gourmet meal. The kitchen fire was used as a stovetop while a rectangular hole — about four-feet long, two-feet wide, and two-feet deep — was dug in the ground to make a bush oven. Meat, vegetables, and bread were all cooked in that oven.

Elephants were always a feature of these safaris. Tom had yet to turn twenty when an elephant in camp threatened to upend his tent in the middle of the night. Tom told me he was so frightened he crept out and darted into Peter Vining’s tent where he lay, under the bed, until daybreak. Sixty years of cooking, and dozens of safaris later, wild elephants don’t faze Tom anymore. On our excursion to cook amongst the elephants he was calm and enchanted. We all were.

On this occasion, Tom lit a fire in his bush oven using mopane wood he’d gathered on our farm. When he judged the temperature to be correct for baking ciabatta bread, he removed some of the hot coals and balanced a baking tray with the dough on two bricks nestled in the remaining embers. Tom then covered the hole with a galvanized iron sheet on which he placed the burning coals he’d taken out, and sealed it by placing rocks on each corner.

Adelina, meanwhile, prepared her own fire in the mbaula using charcoal. This was our stovetop on which we were cooking the beef tenderloin and wild mushroom risotto, using chinyika and kapiupiu chanterelles that we’d foraged in the bush surrounding our house. Chinyikas are meaty and firm, not unlike a shiitake, while the psychedelic orange kapiupiu offers up a most delicate flavor and color.

As we prepped and cooked the lunch, elephants loped down to the river to swim. Hand-reared after being rescued as orphans in the 1960s, ‘70s, and ‘80s, these elephants have grown up with safe human support. The area in which they live has an energy and light unlike anything I’d experienced before. Wild animals like giraffe, wildebeest, antelope, and zebra are drawn in from the surrounding national park, while families of vervet monkeys cavort all around the place; one of them made off with the yeast for our bread and, after tasting it, threw it away, disgusted.

We live a few miles upriver from the elephants. I came upon the idea of cooking amongst them after the owner of Zambezi Elephant Trails told me he’d just completed building The Elephant Café on a deck jutting out into the Zambezi River. I wanted to show him what was possible when cooking only with fire, using locally-produced ingredients and indigenous wild edibles.

We prepared beef tenderloin with white truffle oil, and wild mushroom risotto, alongside warm ciabatta, and served it al fresco in the shade of an ancient tree. Wild sourplum ice cream with meringues followed for dessert. A mother elephant and her baby joined the diners at their table, displaying an alarming partiality to Adelina’s ciabatta.

Karen Blixen, the Danish author known for her classic memoir, “Out of Africa,” said there was something about safari life that made you “forget all your sorrows and feel as if you had drunk half a bottle of champagne … bubbling over with heartfelt gratitude for being alive.” How right she was.

* Grateful thanks to Daniel Banda for the video and some of the picture credits.