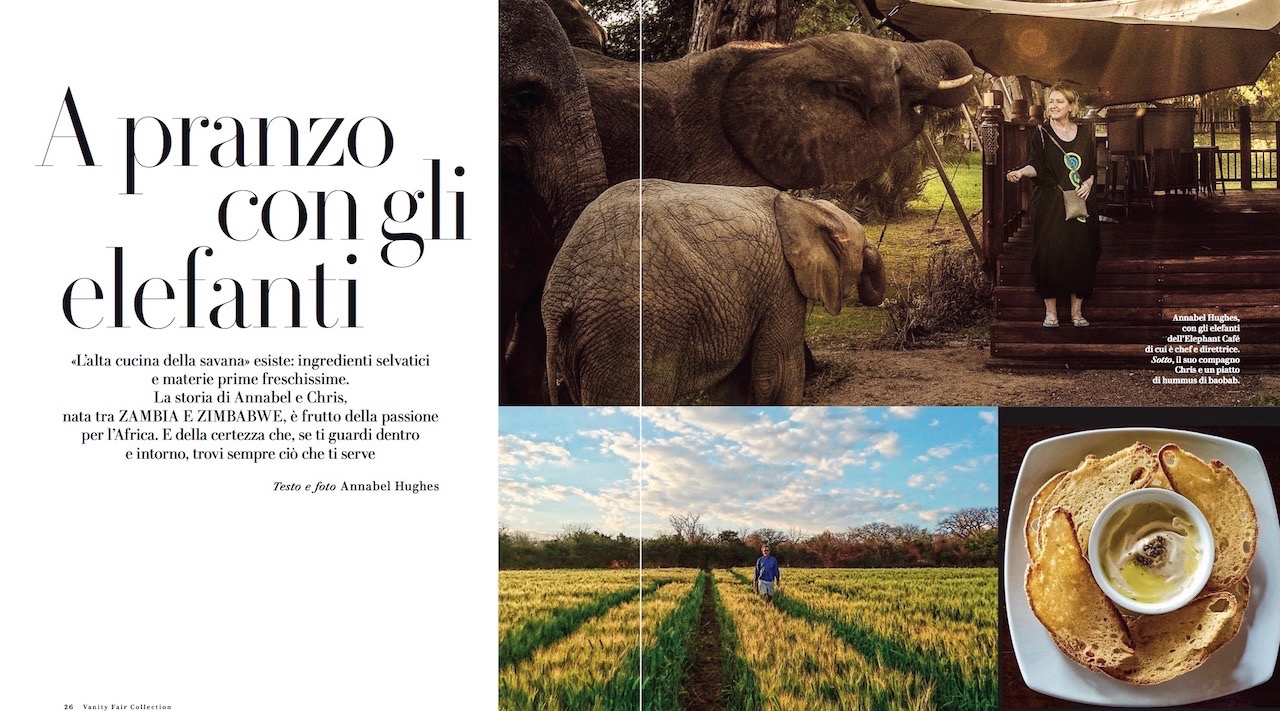 LUNCH WITH THE ELEPHANTS – My Story in Vanity Fair

On March 8, 2017, Vanity Fair Italia published a story I wrote on my life in Zambia. Many of my followers have written to me requesting I publish the original, before it was translated into Italian. Here it is: 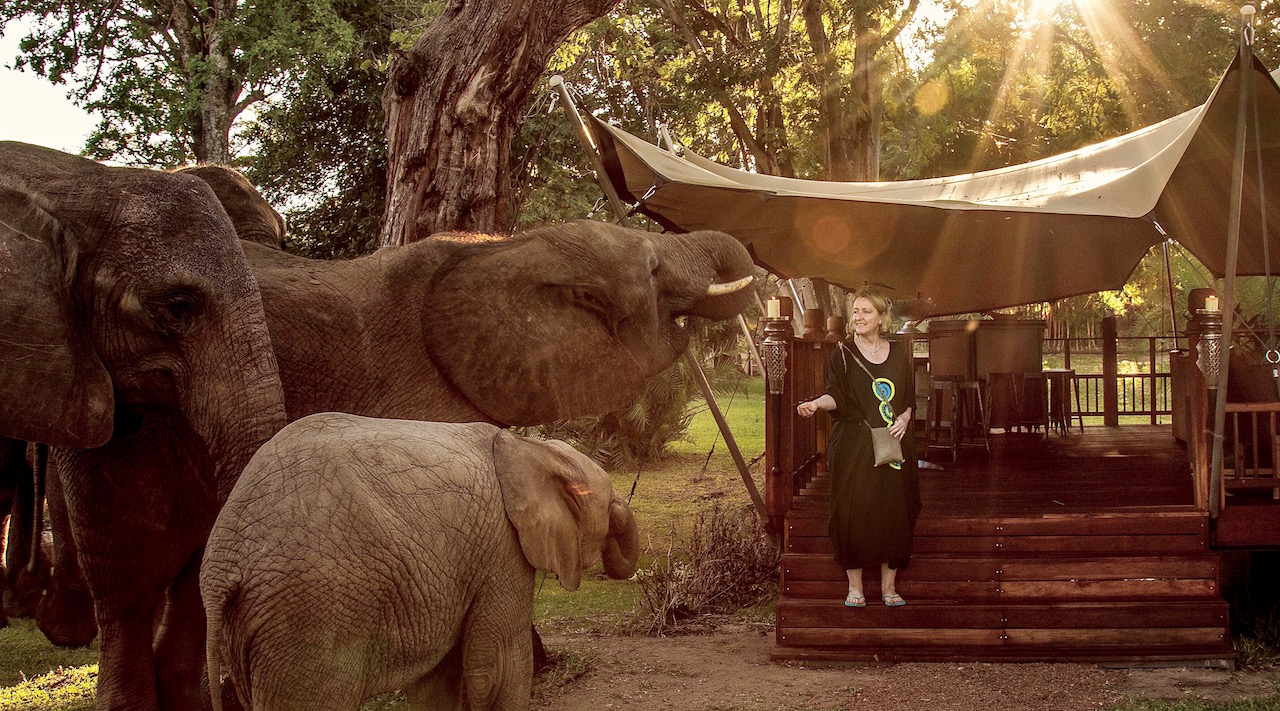 At the end of January 2010 a small elephant, all alone and judged to be under a year in age, tagged on to an artificial herd of rescued elephants being called in by their handlers after feeding on a nearby island in the Zambezi River, upstream from Victoria Falls in Livingstone, Zambia. Sekuti, as the baby was later named, assimilated well into his adopted herd, made up of hand-reared elephants who, apart from their offspring, had themselves been orphaned in droughts and culls in neighboring Zimbabwe decades before.

I spend most days with this herd of ten elephants. I am the chef de cuisine and manager at The Elephant Café, an exclusive tented restaurant built on a teak deck in the Zambezi River, which is the center point of the elephant sanctuary in which they live. It’s the only restaurant in southern Africa where customers can interact with African elephants while dining on fresh, locally-sourced and wild food.

The Elephant Café is located in the Mosi-oa-Tunya National Park, not far from where I too was given succor shortly after Sekuti was adopted by his herd in early 2010. I was living in America at the time, but had traveled to Livingstone to visit my close friend, Chris Aston, after a protracted fight in Washington, D.C. advocating for non-violent democratic change in Zimbabwe, the country in which I, like the elephants, grew up.

Working for nearly seven years with a brutalized Zimbabwean civil society amid death threats, abuse, loss, and trauma, took a mental, physical and emotional toll on me. It was to the kitchen, the garden and the natural world I turned to relax and recuperate. I’d been banned from returning to Zimbabwe in 2002 for my part in steering targeted sanctions, against the country’s political elite, in to law through the United States Congress. At the same time my family’s farm in northern Zimbabwe was stolen at gunpoint. After all this, and having barely survived America’s apocalyptic financial downturn in 2008 in which I almost lost my house, I arrived on Chris’s farm in a state of virtual collapse. 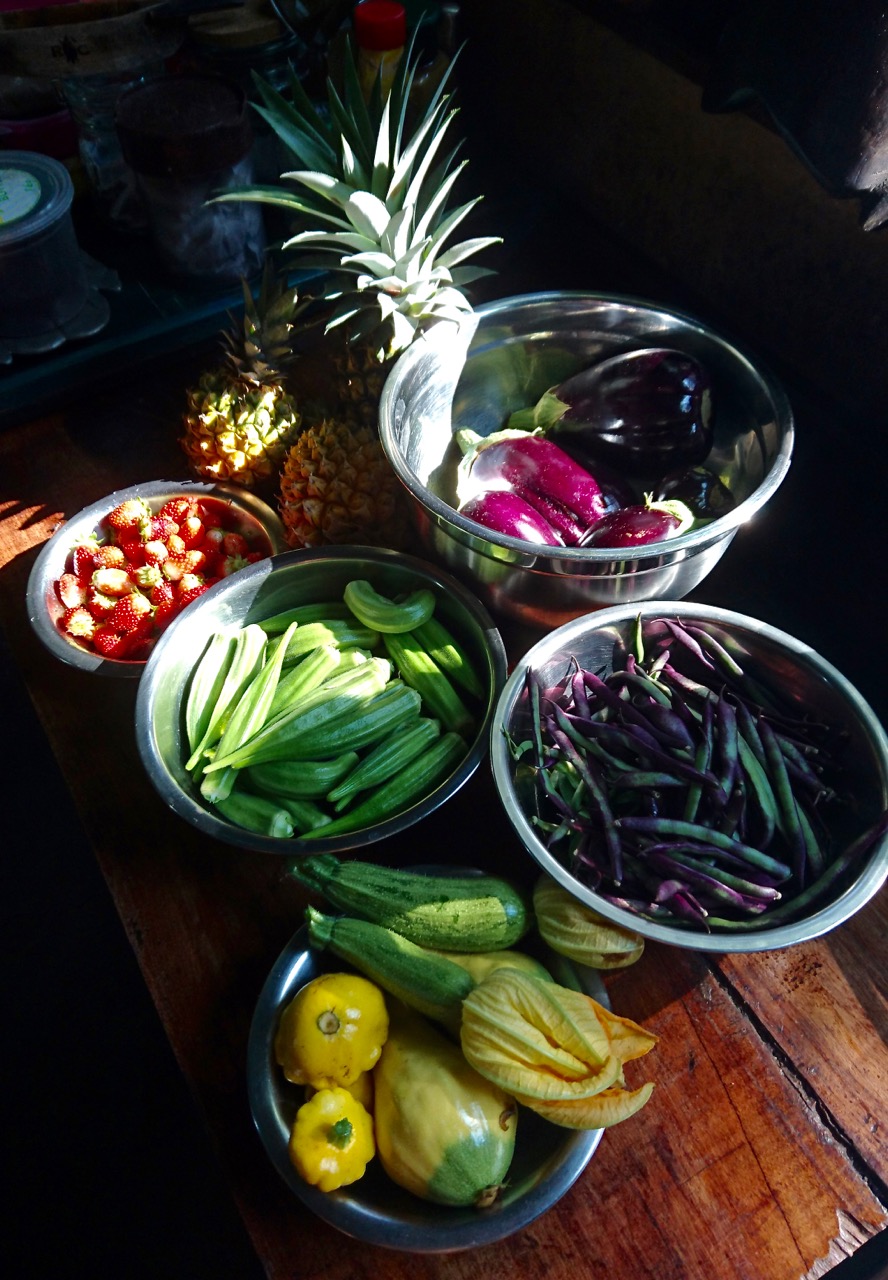 Chris, another Zimbabwean, was himself in a fragile condition. He had also lost his farm under the political dictatorship in 2002. Chris and his partner had crossed the Zambezi River to rebuild their lives in Zambia, and had to borrow 100% from the bank to start again on an unused farm in Livingstone. Two years into this punishing new beginning, his partner was diagnosed with motor neurone disease. She died in 2009, a year before I visited Chris. When we met again for the first time in years, we were the walking wounded.

It was during this week I spent with Chris on his farm that he suggested I take a break from America to return to Africa. The idea appealed to me, but I wasn’t sure where to go. Although I was born in Kenya, we had moved to Zimbabwe when I was six-years-old. My father had died of malaria when I was an infant, and my mother later migrated south to remarry a Zimbabwean farmer.

In Livingstone, Chris and his sensitive, kind ways, combined with long, meditative walks and healthy fresh food, restored me to such a degree that it would take another three years before I acted on his advice.

Food was also a channel through which I witnessed the healing effects of the natural world, thus when I returned to Africa in late 2012, I took a job deep in Botswana’s Kalahari Desert with a safari camp that worked with nomadic San Bushmen. By then, I’d been influenced by the concept of “sufficiency,” a term coined by American inventor, Buckminster Fuller, who believed that “if we looked around us and within ourselves, we would always find what we need.” To me, no way of life exemplified this more than the Bushmen’s. Even though their hunter/gathering existence had been upended and overtaken by the modern world, the people I walked with, and learned from, showed me sufficiency through taking from their meager natural resources only what their bodies needed in that present moment. It is a context which informs the way in which I try to live and work today.

A family tragedy cut short my time in Botswana, but it also brought me back to Zambia, and to Chris on his farm. He suggested I stay with him while I looked for work involving food in Livingstone. Thirty years before, Chris and I forged a friendship over food and writing. He’d studied English literature at university but chose to farm instead, while I’d learned how to cook and went on to become a journalist.

As a cub reporter on one of Zimbabwe’s national newspapers, I was handed a coveted column critiquing the city’s restaurants, not because of my writing skills, but because of my knowledge of food. On one occasion I invited Chris to accompany me to review an upmarket French restaurant in Harare, the country’s capital, and halfway through the meal I challenged him to write the critique for me, to which he agreed. Soon after I had handed in Chris’s review, I was approached by the editor: “Annabel Hughes,” he said with a smile. “Well done. Your writing has really improved.”

That nascent connection with Chris grew quickly into a deep love after I moved on to his farm. Our healing continues four years on, while the kitchen, the garden, and the natural world play an ever-growing part in our lives. I started my blog, SavannaBel, midyear in 2014 to document my growing repertoire in the kitchen, the creation of our organic garden, and my recipe-testing using seasonal garden ingredients, combined with wild edibles and indigenous foods that have flavors seldom tasted outside Africa.

In April last year I was asked to head up Livingstone’s newest restaurant, The Elephant Café. Sitting only twenty-four people, it is a well-appointed vehicle to showcase the “bush gourmet cuisine” I’ve been developing over the past four years. Guests to the café have the privilege of meeting the elephants, including the now eight-year-old Sekuti, and watching them while they dine. The menu changes according to the fresh food available that day, which is, on the most part, produced or foraged within a 20-mile radius of the restaurant. The response from guests since we opened last July has been one of delight. We were also awarded Zambia’s Best New Restaurant in 2016, just four months after opening. 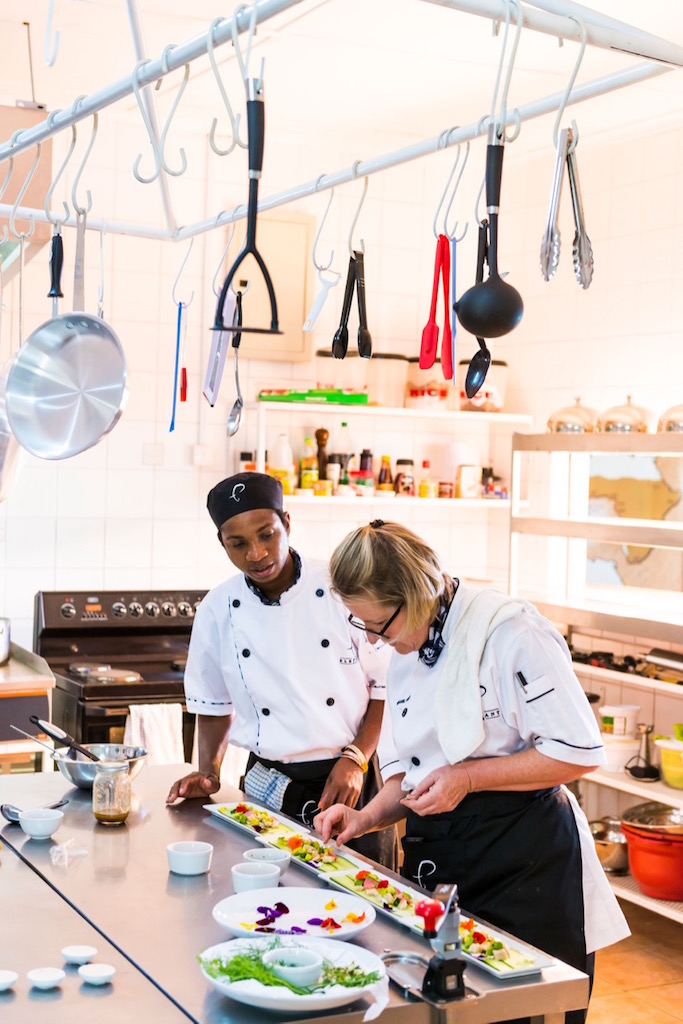 The success, I believe, is a result of a growing collaboration between me and Zambia—both the people and the earth—combined with the elephants. Many of the ingredients I forage for in the wild are also much loved by elephants: mongongo nuts, marula, wild sourplum, baobab and muchingachinga fruit, to name a few. The centuries-old wisdom of our neighboring riverside communities helps us in our foraging for wild food, while the Zambian chefs with whom I work, lead me to the indigenous ingredients in Livingstone’s native markets. As such, it is my sincere hope that by promoting the use of these diverse, and largely unexplored, natural resources, our local economy will also be enriched.

And while we are foraging, picking and cooking, the elephants too are contributing to the quality of our cuisine. We collect truckloads of the processed tons of food they eat in a day to add to our compost heaps that fertilize our organic vegetable garden and fruit orchards. It is a most rewarding synergy. 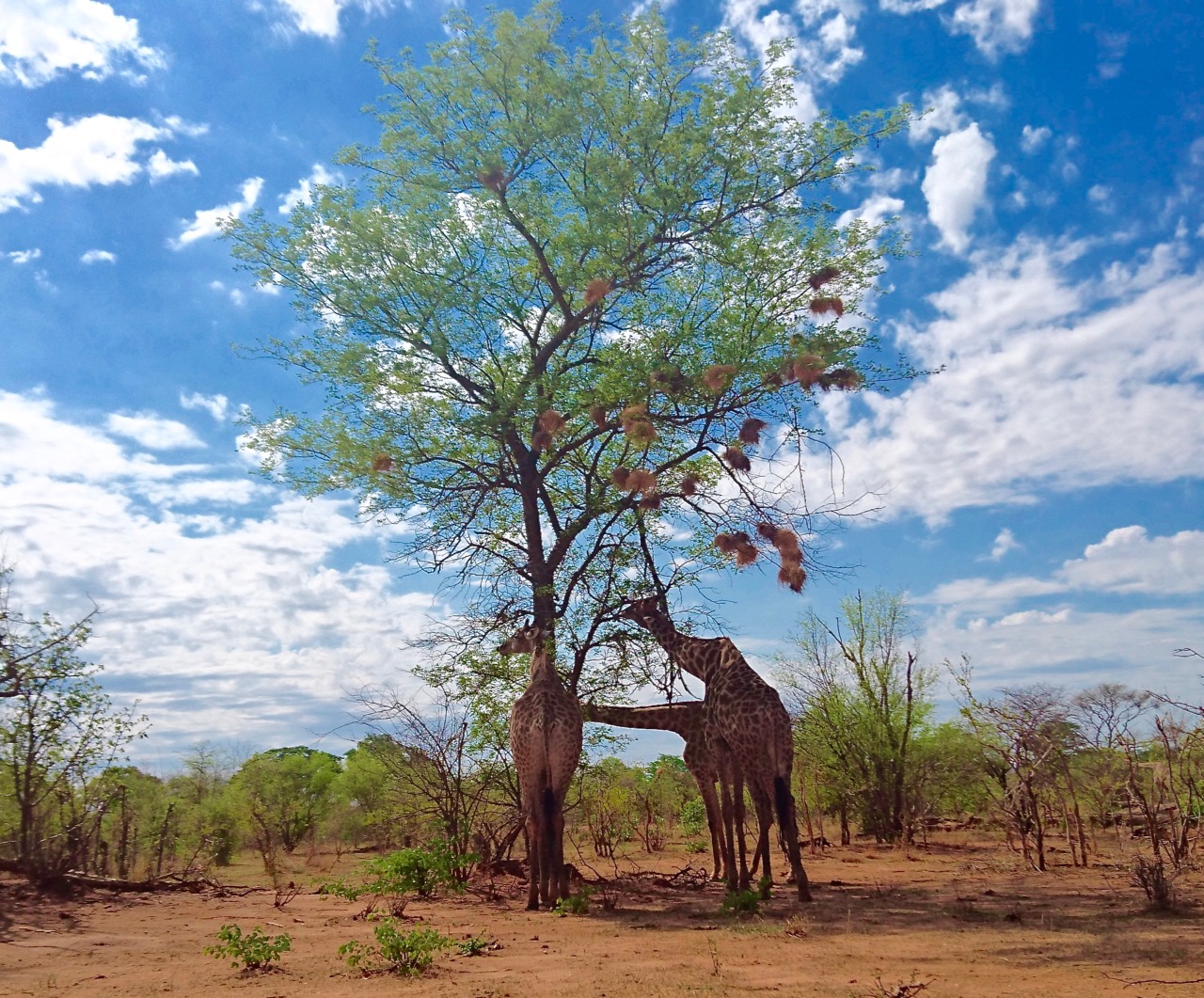 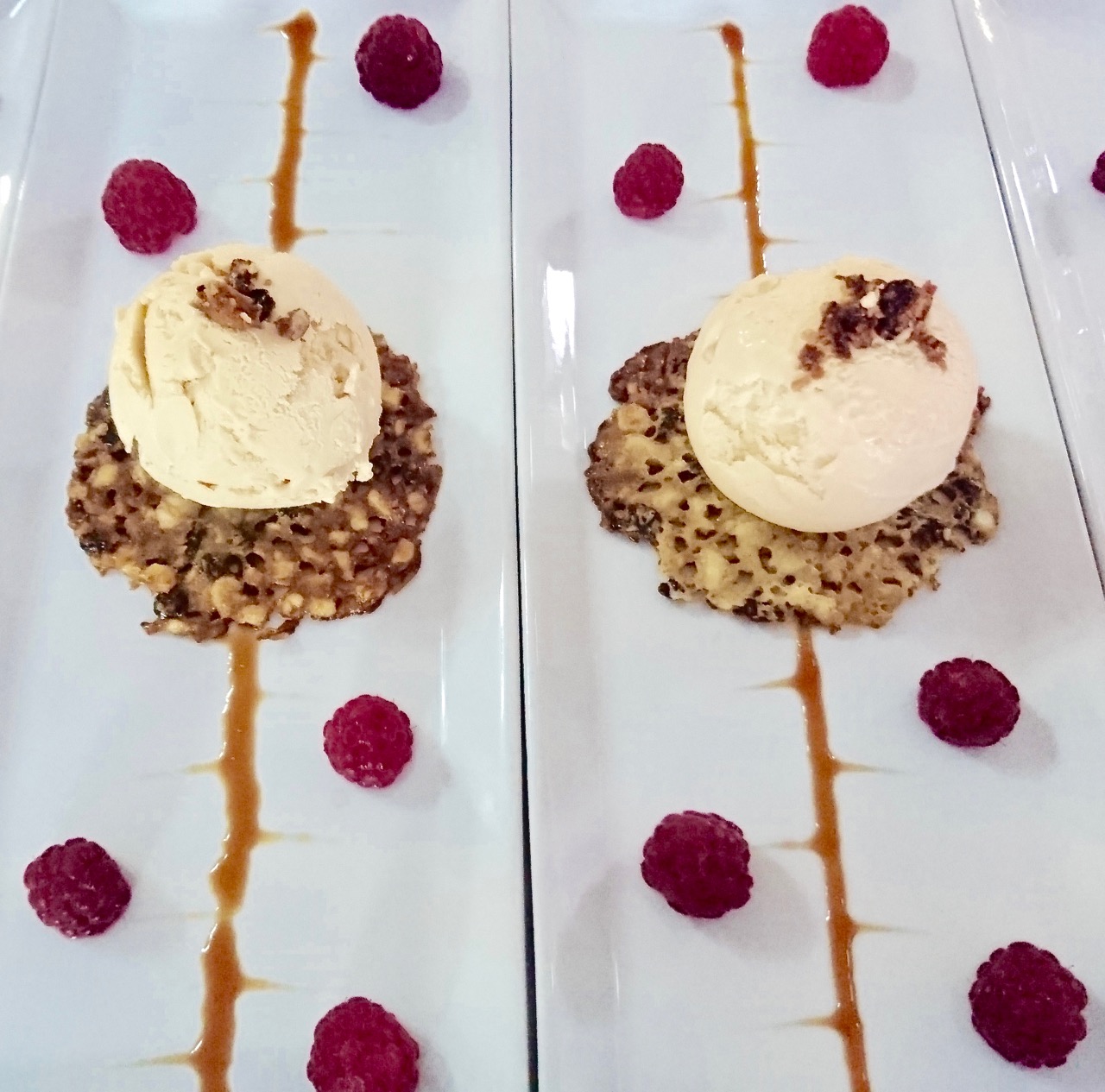