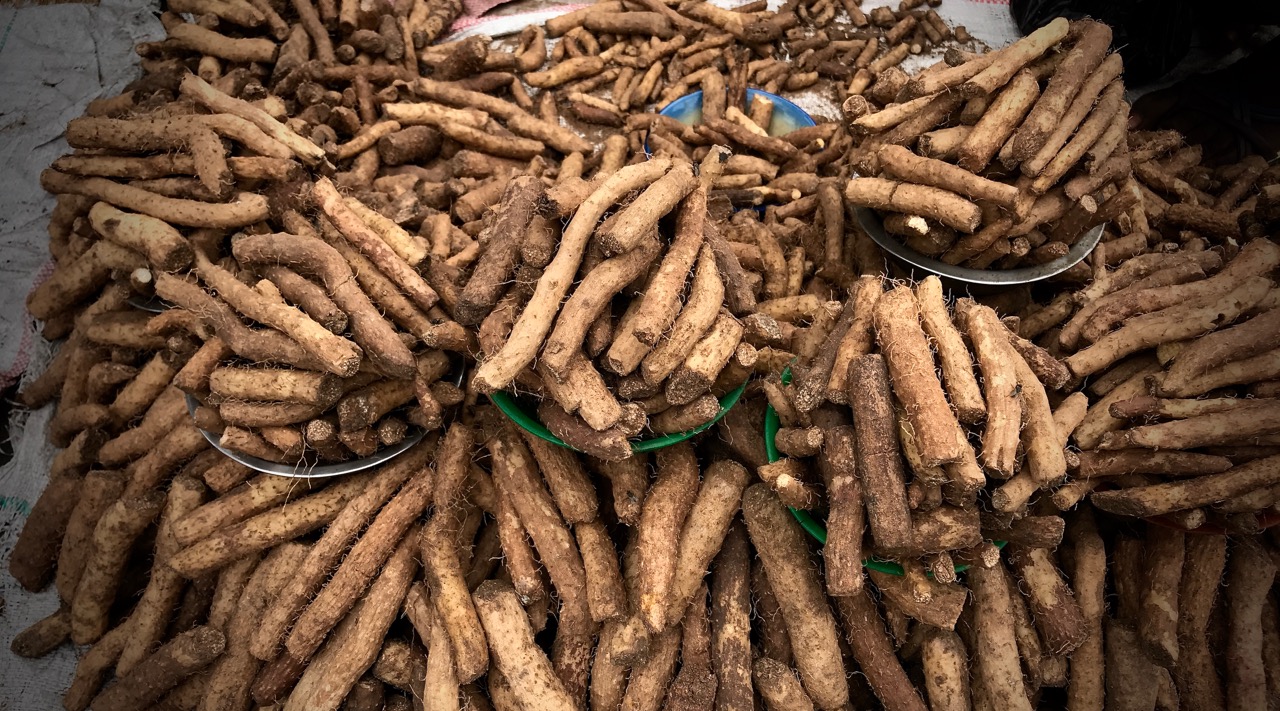 Lusala roots — hairy, weathered, and arthritic-looking, like an old man’s fingers — aren’t the most enticing wild edible I’ve set my eyes on. They are, however, versatile, healthy, and a perfect substitute for potatoes, which we don’t grow here because Chris farms tobacco and the two don’t mix for fear of viral cross-infection.

Almost all the Zambians I know love eating lusala roots, having been fed them as young children growing up in areas often far from towns, with limited access to regular fresh produce. Aubrey Tilimboi, a chef with whom I work, told me that as children they were warned never to eat lusala raw because it was poisonous. I was flabbergasted. “As kids we were taught to always be careful of lusala when it had just been dug up … and that it could only be eaten after it had been boiled.”

Lusala, according to Aubrey, grows on a vine similar to, say, granadillas, or passion fruit. Before the rains, when the earth is dry and lifeless, it’s tricky foraging for the roots. “The thin stems of the plant break off easily, and then it’s impossible to find,” he said, “but as soon as the rain comes, and the vine grows again, it becomes much easier.” Aubrey used to forage for the roots with his mother, who would later turn them into a “relish,” or stew, made with tomatoes and onions, which they ate alongside nshima, or cornmeal, Zambia’s staple food.

It was Adelina Banda who first introduced me to lusala roots, as she has done with so much of the wild food with which I work. I read in a report that they are loaded with fiber, and contain potassium, iron and copper. According to the report, the fiber and mucilaginous components of lusala roots also function as effective prebiotics, “creating an environment in the digestive tract that is conducive for the reproduction, growth, and function of probiotics.”

It was the mucilaginous, or slimy, feel to the root that I initially found off-putting, but I quickly learned that once lusala is boiled this diminishes. When roasted, it goes altogether.

When I awoke with an idea of turning lusala roots into a wild vichyssoise, I didn’t consider that their viscosity would work in helping create a silky texture to the soup. The end result of my recipe-testing produced a vichyssoise more refined than if I’d used regular spuds. The soup was whiter and silkier, with a flavor that blew us away.

Vichyssoise is traditionally served cold, but this soup will also work well served hot. My preference was to serve it at room temperature, alongside hot chunks of fresh homemade ciabatta bread slathered in butter.

Notes: The flavor of this soup improves over time, therefore prepare a day or two beforehand. Wild lusala vichyssoise can be frozen for later use; just refrain from adding the cream until ready to use.